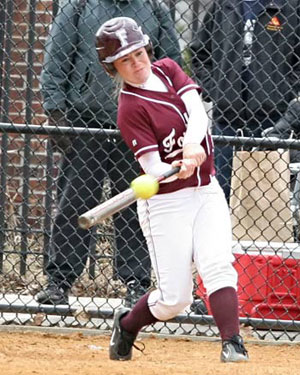 The bats and balls have been put away for the summer but not before two spring sports came close to winning an Atlantic 10 Championship, with the baseball squad advancing to the championship game where they fell to the University of North Carolina, Charlotte. Here is a short wrap-up of the 2007 baseball and softball seasons:

Baseball
The 2007 Fordham baseball squad accomplished one of their goals, returning to the Atlantic 10 Championship, and they did it with style, winning a school-record 19 conference games to place second in the regular season.

The Rams closed out the regular season with a 10-game winning streak to bring their overall record to 33-20 and 19-8 in the A-10. The 19 conference wins were the most for the Rams since they joined the conference in 1996.

The Rams had a first round bye in the championship, defeating the University of Richmond in the second round, 3-1, and advanced to play the top-seeded Charlotte 49ers. The Charlotte bats were hot as the 49ers knocked the Rams into the loser’s bracket with a 15-2 win.

In the loser’s bracket, Fordham sent Richmond home with an 11-9 win and moved onto the championship game, with the Rams needing two wins over Charlotte to take home the crown. Unfortunately, the 49er bats stayed hot as Charlotte took the tournament with an 18-6 win.

Juniors Eric Reese and Cory Riordan were selected to the All-Championship team.

Prior to the championship, three Rams were honored by the Atlantic 10: Reese was named First Team All-Conference and senior Jordan Lert and junior Tom Davis were named to the Second Team.

On June 7 and 8, three Rams were drafted by major league teams: Cory Riordan was taken in the in the sixth round by the Pittsburgh Pirates, John Mollicone was selected in the 27th round by the Tampa Bay Devil Rays and Javier Martinez was drafted in the 29th round by the Seattle Mariners.

Softball
For the fifth straight year, the Fordham softball squad won more than 30 games and qualified for the A-10 Championship. But the Rams couldn’t secure their first ever conference title, falling to Saint Louis University in the loser’s bracket.

The 16-4 conference record was good for second place, giving the Rams a first round bye at the championship. In their first game, the Rams easily defeated Saint Louis, 10-2, to set up a showdown with the number one seeded and host team, the University of Massachusetts at Amherst. Fordham fell to the Minutewomen 5-0 and the team was eliminated by Saint Louis in the loser’s bracket.

Following the conclusion of the Championship, Allison Twarowski andMelissa Andrews were selected to the All-Championship team.

Besides Ayres, Twarowski and Andres, senior Krystle Henry and freshman Erin Fisher were also honored by the A-10 coaches. Henry was named to the Second Team All-Conference and Fisher to the All-Rookie Team.

Outdoor Track
At the A-10 Outdoor Championships, the Fordham women placed fourth of 11 teams and the men were sixth of 10 teams.

Senior Kerstin Greene gave a repeat performance of the Atlantic 10 Indoor Championships, walking away with the 2007 Atlantic 10 Outdoor Most Outstanding Field Performer award by taking gold in the heptathlon with a Championship-record total of 5,088 points. Greene also broke the school record in the heptathlon, surpassing Candice Drinkwater’s 2005 record of 4,178 points.

For up-to-date information on all the Fordham teams, please go to the Fordham Athletics website atwww.fordhamsports.com.