skip to main content
Return to Fordham University
You are at:Home»Inside Fordham»Bank Executive Urges Students to Look Abroad for Opportunities 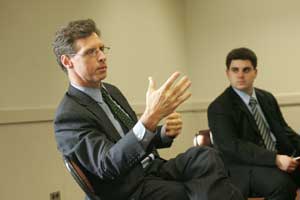 Joseph P. Quinlan (GSAS ’84) didn’t open up his passport to students for inspection during his April 14 visit to Fordham’s Rose Hill Campus. But he may as well have.

Quinlan, managing director and chief marketing strategist of Bank of America Capital Management and a graduate of Fordham’s International Political Economy and Development Program(IPED), spoke for an hour with the College of Business Administration’s Finance Society.

In a discourse with the audience and incoming finance society vice president George Nader (CBA ’10), Quinlan touched on topics from his career to the economic recession. He made it clear that undergraduates should embrace opportunities outside the United States and even bypass Europe for destinations further east and south.

“I’m not going to criticize my colleagues on Wall Street, but I see too many people in my position and lower too focused on the U.S. So you know, there’s a U.S. steel analyst, a U.S. auto analyst; you can’t be that parochial and myopic today,” he said. “There’s one economy; it’s called the global economy, and there are different parts. Learn how to view it that way. If you’re U.S.-centric, particularly at your age, you’re missing the boat.”

To give students a sense of how important it is to understand the religions, cultures and political elements that affect the different parts of the global economy, Quinlan, who previously worked as director of economic research at Sea-Land Services, pointed out that 80 percent of the world’s output and 95 percent of its population exists outside of the United States.

“Geography is so underrated. We’re geographically illiterate; don’t be one of those people,” he said.

As for the sub-prime loan crisis and credit crunch that have been blamed as triggers for the recession, Quinlan said they were inevitable thanks to bad policy decisions made in Washington D.C.

“The problem was we were too lax with money. It’s not just that consumers spent too much; the regulators didn’t regulate enough,” he said.

“I was surprised, reading that E*Trade and H&R Block had to close their mortgage banks,” Quinlan continued. “Quite frankly, I didn’t know they had them until I read about them. But that was emblematic and symbolic that even they were giving out loans. So the Fed did a poor job regulating the financial environment.”

in 1981 and reaches more than 14,000 students at the Lincoln Center and Rose Hill campuses.