skip to main content
Return to Fordham University
You are at:Home»Inside Fordham»Back at Home Base, Veteran Sets Up Camp in NYC

Jayson Browder said he had a difficult time growing up as a mixed-race Latino living in a small rural town in South Carolina. Raised by his grandparents, he was the only boy of color in school and he had a hard time relating to his peers. 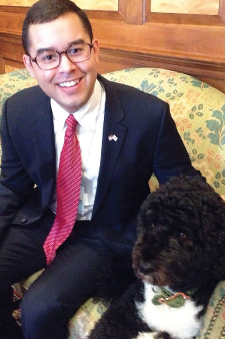 When he was a teen he dropped out of high school and took a job at the local lumber mill, leaving his grandparents understandably concerned.

“I worked at the mill building doors for about a year before I realized that I wanted a bigger challenge,” he said.

With few options open to him, Browder went back to school to earn his high school diploma and enlisted in the U.S. Air Force. He spent the next four years in a civil engineering unit working all over the United States and was eventually deployed to Iraq in 2010. There, he participated in two military campaigns: Operation Iraqi Freedom and Operation New Dawn.

“The military gave me the structure I needed,” he said.

While deployed in Iraq, Browder worked on nation building projects with the State Department and Joint Special Operations Command as part of Operation New Dawn. He enrolled in school while he served, and earned an associate degree in construction technology. He also developed friendships with contractors from Turkey—a nation he’d like to return to so much that he has applied for a Fulbright scholarship.

With his tour of duty complete, Browder returned to the United States and applied to Fordham’s School of Professional and Continuing Studies (PCS) at Lincoln Center. There, he found students whose backgrounds were diverse, like his own, and who were older than most students. The school also accepted most of the credits from his associate degree, and he could tailor coursework to build on his past experience and personal interests.

“PCS has always been very supportive of the nontraditional student, so they understood where I was coming from and where I wanted to go,” he said. “They took these differences that I had and flipped them on their head, making them something else that I could bring to the table.”

He added that the multicultural, multigenerational mix of Midtown Manhattan jibed with his military background.

“I was raised in a small Southern town where there isn’t much diversity, but when I entered military service it was like a cultural melting pot,” he said. “It’s like New York, with every race and creed, and all kinds of people from all over.”

Browder is pursuing a double major in Latin American studies and sociology, allowing him, for the first time, to explore his Latino heritage, he said.

For his first semester at Fordham he focused solely on academics, after which he “hit the ground running,” taking internships at New York State Assembly member Linda B. Rosenthal’s office, the New York Stock Exchange, and U.S. Sen. Kirsten Gillibrand’s constituent affairs office. He was also named a national finalist for the Truman Scholarship in 2012 and has been named a national finalist for the Fulbright for this year.

This semester, he wrapped his time up at PCS with an internship at the White House, where he worked in the Office of Legislative Affairs and the Office of Presidential Correspondence. His tasks there were varied, from researching legislation in the U.S. Senate to helping pick the 10 letters that President Obama will read every evening from U.S. citizens.

“Being a Fordham graduate and working at the White House is a big deal for me, but it’s really big for my grandparents,” he said. “They’re elated, ecstatic.”

Browder said that he definitely sees public service in his future, and that includes running for public office. He hasn’t yet had much of a chance to establish roots in any one community, which would be required in order to be a public figure. However, he is drawn to one in particular.

“I feel myself as a New Yorker,” he said. “I’ll always think of South Carolina as my hometown, but [here]I feel like an adopted son, and Fordham has really accepted me.”