skip to main content
Return to Fordham University
You are at:Home»Inside Fordham»Award-Winning Athlete Courts Both Tennis and European Conflict Resolution 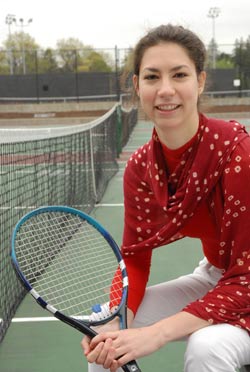 Romanian-born Doina Sandor wanted to be a ballerina as a child, and when her parents switched her from dance to tennis, she was miserable.

“My parents liked tennis a lot; to me, it was a pain,” said the 22-year-old Fordham College at Rose Hill senior, women’s varsity tennis player and 2007 winner of the John Kieran Medal for athletic excellence (named for the sports columnist who coined the tennis term “grand slam”). Sandor admits that, eventually, she came around to the sport.

“With time, I understood its qualities,” she said. “On the tennis court, you are alone with your monsters; tennis built me mentally.” Sandor, incidentally, has the highest GPA of any Fordham student-athlete, at 3.947 (“It was that B in American History,” she said, jokingly.)

The Bucharest native’s tennis playing caught the eye of Fordham’s former women’s tennis coach, Gemma Alexander-Mozeak, in 2002, while she was a senior in high school. Sandor wasn’t particularly vying for a sports scholarship; she was depending on good academic scores and good recommendations instead. But when she got the offer to go to college in New York City, she leapt at it—even though she had a broken ankle at the time.

“When I found out, I started packing my bags,” she said. Sandor credits her father with having the “intuition” to see an opportunity for her playing tennis. “He always had in mind that maybe one day I could play tennis for a team in the U.S., but I never thought about it,” she said. “My father had it right.”

Sandor joined the varsity team as a freshman starter in both singles and doubles competition. As a junior, she was named one of six members of the Atlantic 10 Academic All-Conference team; she was named to Phi Beta Kappa the same year.

A Dean’s List senior and a major in international political economy, with a minor in business administration, she has been accepted to the London School of Economics for the fall, but plans to spend one year working in the New York financial markets. Having interned both at the United Nations, and in Strasbourg, France, as part of the 2006 Syracuse University Summer Program on European Human Rights and Conflict Resolution, she hopes to pursue a career related to the policy aspect of law.

“How law is implemented in a civil society is fascinating,” she said. “In watching conflict resolution in Strasbourg, what was clear to me is that most of the conflicts going on around the world would be solved if human rights would be respected. Not with lawyers fighting in court or arguing in front of judges, but with lawyers working at NGOs to raise awareness.”

She looks forward to trying a few jobs before making a final career decision. This summer, she wants to do both paralegal work and give tennis lessons in a private club.

“One of the reasons I chose international political economy is because it brings so many things together,” she said. “I love knowledge—I am a nerd! Long goals are fun but you never know where tomorrow will take you—my entire life is an example of that.”