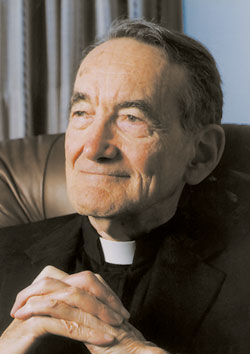 1918 Born on Aug. 28 in Auburn, N.Y., the son of future Secretary of State John Foster Dulles and Janet Pomeroy Avery.

1941 Applies that summer for a commission in the Naval Reserve and is called into active duty.

1946 Converts to Catholicism in his first year as a Harvard law student.

1951 As a Jesuit scholastic, begins teaching philosophy at Fordham.

1953 Leaves Fordham to pursue theological studies at Woodstock College in Maryland in preparation for his ordination.

1956 Ordained at the University Church on the Rose Hill campus. The ordination is reported on the front page of The New York Times.

1958 Enrolls at the Pontifical Gregorian University in Rome.

1960 Completes his dissertation and receives a
doctorate in sacred theology. He begins his 48-year
professorial career.

1962 Becomes one of the chief exponents and
developers of the theology of the Second Vatican Council.

1969 Appointed to serve on the Fordham Board of Trustees.
He would step down in 1972.

1974 Becomes professor of systematic theology at
the Catholic University of America. Models of the Church
is published; it will become his most widely read book.

mid-1970s Criticizes the extremes of the intransigent
wing of Catholic theology as well as the radical reformist wing,
maintaining the need for continuity and accommodation.

1988 Returns to Fordham as the Laurence J. McGinley Professor
of Religion and Society. He delivers the first of 39 McGinley Lectures.

2001 Elevated to the College of Cardinals by Pope John Paul II
on the steps of St. Peter’s Basilica in Rome.

2008 Gives his final address as Laurence J. McGinley
Professor of Religion and Society on April 1 at
Fordham Preparatory School.

2008 Celebrates his 90th birthday on Aug. 24 with family,
fellow Jesuits and friends at Fordham University.