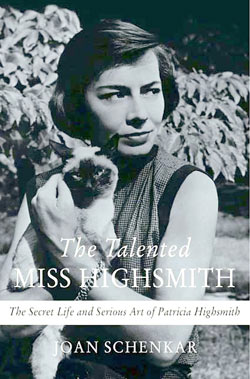 15Biographer Joan Schenkar told a Fordham University audience on Feb. 3 that she delved into “the most dangerous imagination in the last half of the 20th century” when she undertook a lengthy biography of the late novelist Patricia Highsmith.

In a talk sponsored by Fordham’s creative writing program, Schenkar painted a portrait of Highsmith, author of The Talented Mr. Ripley, as a woman of “volatile definition”—a prolific, talented writer who was eccentric, had a split personality and lived an unconventional, ambivalent life. Schenkar said that Highsmith, a lesbian, grew up imagining herself a boy, and often dreamed of murdering her stepfather.

In doing research for the book, Schenkar found that Highsmith frequently used the exact locales where she had been intimate with her many lovers as the sites for her fictional murder scenes.

“She was a woman who fulfills every definition of the word perverse,” said Schenkar, author of The Talented Miss Highsmith: The Secret Life and Serious Art of Patricia Highsmith (St. Martins, 2009). “She loved what she hated and hated what she loved.”

Highsmith wrote more than 20 books, including five Ripley novels and the murder suspense novel, Strangers on a Train. The duality of many of Highsmith’s characters, Schenkar said, took seed during her job writing comic book scripts for superheros with alter egos, during the 1940s and 1950s.

After some success with Strangers, Highsmith moved to Europe, where she involved herself in many turbulent relationships and traveled as a means of changing her experience.

The bizarre author also had a passion for snails as pets, said Schenkar, and maintained a collection of some 300 of them. When she traveled, she carried them in cottage cheese cartons and even took them out for her own amusement while she dined in public.

Schenkar attributed the lack of American success of Highsmith’s novels to her expatriate status and to her dark themes, which scorned and mimicked the “American dream” so predominant in the post-war culture. Her novels, best-sellers in Europe, gained more notoriety in the United States following the 1999 movie release of The Talented Mr. Ripley, starring Matt Damon.

Although this was not Schenkar’s first biography, the book was unique in its non-chronological, non-linear design, said the author. Schenkar devoted each chapter to a particular theme or obsession in Highsmith’s life and work because she felt that chronology could not capture Highsmith’s “extreme character.”

“She was one of those people who was outside of definition, which is why she is so interesting,” said Schenkar. “I had to expand my own imagination to comprehend her life.”