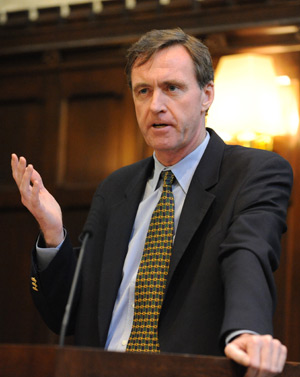 Chris Lowney says professionals on Wall Street could have made better choices had they internalized the teachings of the Exercises.
Photo by Chris Taggart

For the American economy to function well, it needs people who possess a sense of purpose greater than themselves and the courage to do what is needed, a noted author said on April 16 at Fordham.

The Spiritual Exercises are a monthlong series of meditations, prayers, considerations and contemplative practices that help strengthen the Catholic faith in contemporary people. They present a formulation of Ignatius’ spirituality in a series of prayer exercises, thought experiments and examinations of consciousness—all designed to help people experience a deeper conversion into life with God.

Every fully formed Jesuit undertakes a 30-day experience of the Exercises twice, once in training and again a decade later. Each Jesuit is further expected, every year, to engage in them again for eight days.

So could those exercises have averted the Wall Street crash of 2008?

“Unfortunately, probably not,” Lowney said. “But the title was not flip. My bottom line is that by internalizing dynamics of the Exercises, professionals on Wall Street could have made better choices that would have ameliorated the scale of meltdown we’ve suffered.

“By the way, those same dynamics help parents, university professors, students and nurses to do their jobs better, too,” he said.

So what led to the financial meltdown of 2008?

“Human beings were involved, and human beings made horrific decisions that exacerbated the crisis,” Lowney said. “Some decisions were merely dumb; others were dumb, reckless and immoral.”

While much of the post-crash punditry has revolved around issues of regulation or moral platitudes like, “Don’t be greedy,” it is humans who decide how much risk is too much, whether a derivative should be more tightly regulated, or whether to act greedily in business dealings, Lowney said.

“Virtually no attention has been paid to help sharpen the decision-making skills of the human actors in this industry,” he said. “This is where Ignatius and his Exercises can contribute critically.”

Lowney focused on five cultural crises that contributed to the 2008 catastrophe and how Ignatius’ spiritual technologies could help turn those who work in the financial industry into better decision makers:

• Embracing purpose beyond self in a culture that presses us to pursue self-interest alone. “St. Ignatius’ Exercises force participants to reflect deeply about human purpose before making decisions about their own careers or the lives of others.”

• Distinguishing ends from means in a world that has collapsed the difference between them. “We court problems when we become so fixated on any means, however good, that we forget to think about purpose; or, in worst cases, where we turn a means into an end.”

• Making free, purpose-driven choices rather than acting on unhealthy attachments. “As Ignatius would see it, we humans often choose badly not because we lack data or analytical tools, but because we are gripped by ‘disordered attachments,’ unfreedoms or desires and biases that undermine our decision-making ability.”

• Developing a habit of reflection in a world that just moves on.

• Becoming courageous leaders in a world with too few of them.

“The Exercises’ real power, when they work well, is in integrating a methodology for making decisions with the courage and commitment to live those choices,” Lowney said.

“The Exercises can be a source of great advantage to a financial industry that needs better-skilled decision makers, a source of remarkable competitive advantage to the university that can produce such individuals, and, above all, a source of profound spiritual formation for students, staff and administrators of this University,” he said.