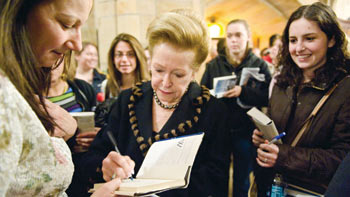 Mary Higgins Clark signs a book for a fan after her lecture on “Life After Fordham” on March 4.
Photo by Ryan Brenizer

Author Mary Higgins Clark (FCLC ’79) told a crowd of roughly 300 fans and admirers that her Fordham education, which she undertook after some success as a writer, helped sharpen her literary skills and build self-confidence.

The internationally renowned best-selling author, known as the “Queen of Suspense,” lectured Tuesday, March 4 on “Life After Fordham” as part of the United Student Government’s Fordham Week celebration.

“Going to Fordham for five years at night to earn a degree helped in my thinking and made me feel better about myself,” said Higgins Clark, speaking on the Rose Hill campus. “It sharpened and enhanced everything I was doing.”

Higgins Clark grew up in the Bronx not far from Rose Hill. She said she never dreamed of going to college when she was young because she wanted to help support her family, so she attended secretarial school and worked as a stewardess on Pan American Airlines. But the desire to earn a degree never left her, and after raising five children on her own (she was widowed in 1964) she enrolled at Fordham.

The author said that her religion and her Jesuit education have contributed to her decision to keep graphic sex and violence out of her work, yet not abandon passion and suspense.

“I think Alfred Hitchcock movies were classics of suspense, yet nobody was blown up,” she said. “And books like Wuthering Heights throb with passion. You can have passion without the graphic descriptions that make you feel as if you’ve stumbled into someone’s physical exam.”

Recalling the first rejection she received on a story from Redbook—“light, slight and trite, they called it”—Higgins Clark said she persisted, even in spite of numerous rejections. Her first book about George and Martha Washington, Aspire to the Heavens (Meredith Press, 1969) netted her $1,500 and ended up in a “few bookstores next to Norman Vincent Peale and the Holy Bible; it went absolutely nowhere!”

But finally, Higgins Clark hit her stride with Where Are the Children? (Simon & Schuster, 1975).

Ironically, in 2002 Higgins Clark’s publisher, Simon & Schuster, reprinted the book under the title Mt. Vernon Love Story, for which the author was offered $1 million.

“You never know,” she said with a smile. “That first book might just come back to haunt you.”

One of Fordham’s most active alumnae, Higgins Clark served on the University’s Board of Trustees from 1990 to 1996. She received an honorary doctorate from Fordham in 1998 and the Founder’s Award in 2004.