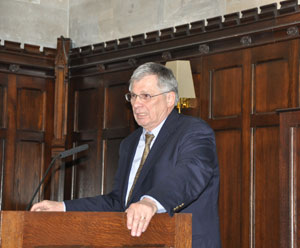 Paul Mariani, Ph.D., has written more than 14 books on such subjects as Robert Lowell and William Carlos Williams.
Photo by Gina Vergel

Paul Mariani, Ph.D., has penned several biographies of poets, but as he said on March 31 at Fordham, none has moved him more than the Jesuit Gerard Manley Hopkins.

“I fell in love with his work,” Mariani said, recalling how he discovered Hopkins after trading assignments with a Manhattan College classmate who wanted to research William Butler Yeats.

“It was a bond right from the beginning,” he told the audience that packed Tognino Hall.

Mariani, a poet and professor of English at Boston College, spoke about his study of Hopkins, an innovative poet who was largely unknown while he was alive, but critically acclaimed after his death.

Mariani’s doctoral dissertation on the poet grew into a book, A Commentary on the Complete Poems of Gerard Manley Hopkins (Cornell University Press, 1970), which he finished before he was 30.

Even after the book was published, Hopkins, who converted to Catholicism as an Oxford undergraduate and later became a Jesuit, kept calling Mariani.

“With Hopkins, you keep reading and reading and it goes deeper and deeper,” he said. “Fifty years later and I’m still finding treasures.”

Mariani was inspired to write a biography on Hopkins, Gerard Manley Hopkins: A Life (Viking Adult, 2008), while at a Jesuit retreat.

“Here we are, sitting in silence. It’s cold outside and there are white-outs, and yet I had a consoling sense of him being in the room with me,” he said. “I realized now is the time to write the biography.”

Mariani said he was pleased with the positive reviews of his book, which chronicles Hopkins’ life and work. Yet there were some negative reviews as well.

“Critics are saying he was destroyed by the Jesuits, that he was gay and if he had only followed his deepest instincts, he would’ve gone the way of Oscar Wilde. But that’s not what Hopkins was about,” Mariani said.

“My own sense of having studied Hopkins [for more than 40 years]is that he knew what beauty was. He knew what mortal beauty was, but he said, ‘Leave it and put it aside.’

Mariani is the author of 14 books, including biographies of Robert Lowell, John Berryman, and William Carlos Williams.

His talk was hosted by the Francis and Ann Curran Center for American Catholic Studies and Fordham College at Rose Hill.