skip to main content
Return to Fordham University
You are at:Home»Inside Fordham»Author and Scholar Completely ‘Plugged Into’ the Media World in the Age of Youtube, Facebook and the Blogosphere 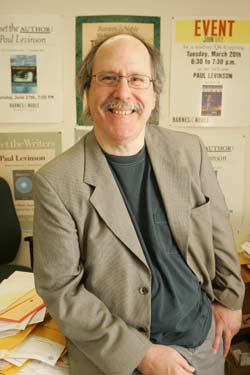 Paul Levinson, Ph.D., is an expert in media
and communications.
Photo by Bruce Gilbert

Often by the time most of us learn about the latest in new media, it’s already yesterday’s news. That is most definitely not the case when it comes to Paul Levinson, Ph.D.

Since his days in the 1960s as an undergraduate studying media through his nearly six years as chair of Fordham University’s Department of Communication and Media Studies, Levinson has been fascinated by the ways and means of mass media. It is the passion that fuels his workaholic tendencies and makes his job seem less like work and more like fun.

“For me, seeing or reading something is inevitably to want to talk about it, to write about it,” says Levinson, who admits to constantly watching television, listening to the radio and taking in news and events online, then synthesizing all that information into books, blogs and, not least importantly, his classes. “The difference between being a perceiver and writing about it is nonexistent.”

Levinson came of age at a time when media studies, which is an interdisciplinary branch of the field that focuses on media environments, was being conceived by Marshall McLuhan, the famed communications theorist who coined the phrase “the medium is the message.”

Media theorists study how the structure and content of media messages affect people—and New York City was a hotbed for the nascent field in 1960s. Levinson, a Bronx native with a penchant for writing, was immediately intrigued.

“To understand the impact of any medium, you must look at the whole environment in which it exists—the social arena, the political implications, etc.,” says Levinson, 60.

Overall, Levinson says that undergraduates at Fordham and elsewhere have not been too eager to sign up for classes in new media, probably because the Internet and sites like YouTube and MySpace have been a “fundamental part of their everyday lives” from the beginning.

“Five or six years ago, which wasn’t that long ago, [the Internet]was a very particular realm of communication,” he says. Today, the Web is much more than simply text on page. Video, audio, blogs, games and host of other forms of communication define the Internet experience. It’s hardly possible study each independently, like a scientists might a specimen in a lab.

What is increasingly drawing the interest of students, Levinson says, are classes that explore how media and communications are used to persuade and emotionally manipulate, to make people do things they might not normally do. Not surprisingly, as the country gears up for an election season in which candidates have more means of reaching voters than ever before, the communication and media studies department is incorporating that into its class offerings.

Levinson is preparing a class for the spring called Politics and New Media (he concedes it’s hard to get away from the term). It will look at the way campaigns use tools like the Internet to reach and influence voters. Recently, he wrote an article on his blog (InfiniteRegress.tv) on the mock music video released on the Web that featured the so-called Obama Girl. The video, which aired on YouTube and other websites, featured a young woman breathlessly singing her love for presidential candidate Sen. Barack Obama.

Although the Obama campaign had nothing to do with producing the video, it caused a stir in the news media weeks and months after it begin airing. The video’s producer, Ben Relles, saw the article and agreed to appear in one of Levinson’s graduate seminars on propaganda and persuasion. He even had the Obama Girl herself, Amber Lee Ettinger, visit his class in September.

For Levinson, it is remarkable that one person can put together a video, distribute it online and be viewed by countless numbers of people and possibly have an influence. Who could have imagined such a thing a few years ago? Levinson is the first to admit that even as immersed in the media as he is, it is virtually impossible to predict how people will harness the ever-evolving technology to communicate.

It’s not for lack of trying. He counts on friends, colleagues and students to keep him posted on media developments that even he might have missed, and he is busy thinking and writing about the nature of mediated communication in the 21st century.

“Nowadays, there’s barely more than a day that goes by without a new development in communications,” Levinson says. “There is no doubt media need to be studied. I think we’re going to see more of media being the subject of scrutiny and study in the future, and that’s a good thing.

“So there’s plenty to do in the field and that’s good for me because I’m at my best when I don’t have a second to breathe,” he says. “I feel plugged into the universe.”