On April 9, humanist and atheist Philip Kitcher, Ph.D., told an audience at Fordham that even though he believes much of what the world’s religions have to say is untrue, they still have a great deal to offer. 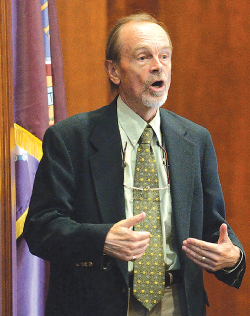 Kitcher, the John Dewey Professor of Philosophy at Columbia University, delivered “Science, Religion and Progress” to a standing- room-only crowd at the Lowenstein Center.

Kitcher delved into the fields of mathematics, ethics, and science and cited Sir William Hamilton, Robert Bellah, and Ludwig Wittgenstein, among others, on the way to articulating his own pragmatist view that there are multiple kinds of truth.

Among the different kinds of “truths” that exist, he said, is scientific truth, or factual truth. There are other kinds of truths, however, expressed in the ways in which we construct and reconstruct the worlds we live in. When people first realized in the 19th century, for instance, that not all of the things that live in the sea are fish, and that whales, seals, and dolphins are different from fish, it represented a reconstruction. And this process continues to this day.

“Some of the differences that are going on at the moment, as we reconceptualize the ways we think about people’s sexuality or about the differences within the human population, are restructurings of the world,” he said.
Because there are different kinds of truth, he said, it is possible to endorse seemingly incompatible truths without contradiction.

“The way in which truth works varies across different kinds of linguistic contexts and things that we do with language,” he said.

Kitcher stated that although he thinks that the stories of all the major religions are false in a literal, factual, and scientific sense, they can be true in another sense.
That’s because the “strong mythical truths” they tell reflect enduring features of the human condition, and they will always remain valuable.

“Truth applies . . . when religions introduce new linguistic forms and new statements that form stable elements of progressive religious practice,” he said. “As with the pragmatist insight into truth in mathematics and ethics, it . . . allows for the idea that a notion of truth is emerging from a prior notion of progress, and that notion of progress is founded in human needs.”

Kitcher disagrees with other secular humanists who see a danger resulting from religions that profess that their stories are literally true.

“Believing something that is false is not the worst thing that can happen to someone,” he said. “People who are bereft of some sort of religious practice can suffer far more greatly” than any benefit derived from believing in true things.

In the real world, he said, people who are suffering gain enormously from religious practices—whether based in truth or myth.

Kitcher’s talk was part of the annual John C. and Jeanette D. Walton Lecture in Science, Philosophy and Religion.