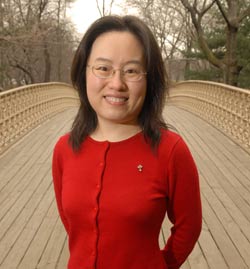 China is a nation on a high-speed train.

Once dubbed a sleeping giant, market reforms initiated by the government some 30 years ago havw transformed the nation from a state-managed, largely agricultural society into a thriving growth and efficiency-driven economy. According to the International Monetary Fund, China’s gross domestic product now ranks as the third-largest world economy and shows no signs of stopping.

But the former sleeping giant is also awaking to a surplus of social problems. Qin Gao, Ph.D., assistant professor of social work in the Graduate School of Social Service, said the new market economy is creating income inequality and emerging social needs, which necessitates a basic social benefit system for certain strata of the population.

Gao, an expert on social welfare policy in China, points to two growing problems in the world’s most populous country. One is the widening gap between social benefits for China’s rural and urban populations (these include pension, housing, health insurance, food subsidies, education and others).

Gao has authored “The Chinese Social Benefit System in Transition: Reforms and Impacts on Income Inequality,” upcoming in the Annals of the New York Academy of Sciences. She cites data that shows social benefits account for 1 percent of rural household income, while making up 25 percent of urban household income. Rural communities, she said, have few social services except for those with no income sources or family support, and the burden falls increasingly on families to fend for themselves against the challenges of poverty, unemployment and other crises.

The second problem is the virtual lack of social services for the swelling migrant populations flocking to the cities to find work. Migrants make up more than 11 percent of China’s 1.3 billion population, and average 20 percent within the cities. China, Gao said, is faced with developing social problems traditionally associated with a rising industrial economy: unemployment, rural-to-urban migration, unequal opportunities, and lack of unemployment insurance, health care and other social benefit provisions.

“Migrants are a huge proportion of the population,” she said. “You might want to draw a parallel between America’s undocumented workers and China’s migrants, but it is not quite appropriate. U.S. illegal aliens actually fare a bit better. Some U.S. services here don’t ask for identification. Unfortunately, this is not the case in China.”

The new social reality that exists alongside China’s economic boom is one of a floundering labor force with no safety net. For the most part, migrants are working age, rural people relocated in an urban locale, caught somewhere between China’s two traditional official residence identities: rural and urban.

Gao explained that when a child is born in China, it is registered at birth under a system called Hukou—either a member of a rural community or an urban community. The designation follows the person like a social security number; once grown up, that man or woman can move to an urban area, but not reap any of the city’s social service benefits that are much greater and that city-born residents enjoy as their birthright. That means migrants living outside of their Hukou have no access to schools, health care, subsidized housing and other state benefits.

Gao said there are ways to shed one’s rural Hukou—through military service, completion of college or through investing in urban property—but most of China’s 150 million migrants can’t afford it; therefore they take jobs such as construction, factory or service workers with low pay and no benefits.

“In the urban areas in China before the economic reforms, there was no unemployment,” said Gao, “Everybody was entitled to a job assigned by the state. But now you compete for work, which is good for many; but people with lower education, with lower social capital and networking possibilities lose out on opportunities.”

Gao knows something of this system firsthand. Born in a rural community, Gao and her family moved to a city when she was five. She lived with her grandparents because her parents had to work, and families were expected to provide child care.

“Every country that moves from an agrarian to an industrial base has to go through this transition,” Gao said. “For China, however, it is at a much faster pace.”

Luckily, Gao said, the Chinese government is beginning to get the message thanks to scholars, artists, non-governmental organizations and international watchdog groups.

“Social service is primarily a governmental responsibility,” Gao said. “While the government recognizes the problem, it [also]needs to have determination to solve it. Because of the huge population, it is going to cost much money. But it’s important for meeting people’s needs and for facilitating the growth of China and maintaining social and political stability.”

Gao also noted that China is not alone in facing these challenges, so she is expanding her research to include cross-national comparisons. She is now working to compare social programs in China with those in Vietnam, and she plans to research the effectiveness of China’s Minimum Living Standard Assistance Policy in improving families’ economic and subjective well-being.

Gao’s work on China has attracted grant support from the Chiang Ching-Kuo Foundation for International Scholarly Exchange and the Horowitz Foundation.

“These grants are encouraging,” Gao said. “I hope to continue producing research that helps educate policymakers about the social service needs and [that]suggests future policy directions.”