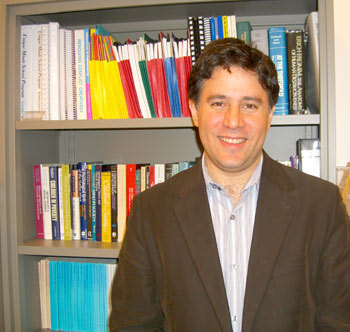 Joshua L. Brown, Ph.D., a Fordham University assistant professor of psychology, has received $1.7 million from the National Institute of Mental Health (NIMH) to test the long-term effects of teaching social-emotional skills to children in elementary school on their health risk behaviors as they make the transition from elementary to middle school.

Brown is a co-principal investigator of the three-year study titled “Health Risk Behavior in Late Childhood: Impact of a Longitudinal Randomized Trial” along with former Fordham faculty member Stephanie Jones, Ph.D., now at the Harvard Graduate School of Education.

The intervention, known as the 4Rs Program (Reading, Writing, Respect and Resolution) is a whole-school intervention that trains and supports all teachers in grades K-5 in the use of a curriculum that integrates the teaching of social and emotional skills into the language arts.

Through the program, teachers learn how to use high-quality children’s literature as a springboard for helping students gain skills and understanding in the areas of handling anger, listening, assertiveness, cooperation, negotiation, mediation, building community, celebrating differences and countering bias. The program was developed and is run by the New-York based Morningside Center for Teaching Social Responsibility.

Preliminary results, said Brown, suggest that students in the 4Rs intervention schools had more positive developmental changes with regard to health risk behaviors such as aggression/violence and depression than students in control schools.

The intervention also appears to promote more positive academic outcomes, such as reading and math achievement, for those students at the greatest risk of aggressive behavior.

Now, Brown and his research team will use the NIMH grant to track 850 of these students through seventh and eighth grade, and continue to measure the same set of health risk behaviors, including aggression/violence, school disengagement/failure, depression and substance use. They hope to learn how these risk behaviors co-occur across developmental periods (middle childhood to adolescence) and examine links between early patterns of risk behaviors and later problems. Another central goal is to examine whether and how exposure to intervention in elementary school leads to changes in health risk behaviors across this important transition period.

“The switch from elementary to middle school, along with the beginning of puberty, is often fraught with a lot of developmental challenges for kids,” Brown said. “Kids are no longer with the same teacher, and middle schools are feeder schools with lots of kids from different elementary schools. Finding one’s place in a new school environment and within new peer groups can be challenging.

“The question is, if the child was exposed to the 4Rs in elementary school, does that [exposure]slow, or even prevent, the onset of risk behaviors such as substance abuse, or negative peer issues? In other words, are the initial intervention effects we are seeing sustained once the kids leave elementary school?”

Due to the widespread nature of the cohort, Brown said, the middle school students and their primary caregivers are being interviewed one-on-one in their homes, while the students’ English Language Arts teachers are completing online surveys. Interviewing began in November and will continue through 2010.

“Most studies of school-based interventions of this type follow children over relatively brief periods of time, and rarely follow them over a major stressful life-stage transition,” Brown said, “so we have an important opportunity to see whether promising effects of an elementary school intervention can promote positive development over an extended period of time and an important transition period.”