skip to main content
Return to Fordham University
You are at:Home»Inside Fordham»As Fordham’s President’s Club Grows, so Does the Spirit of Giving 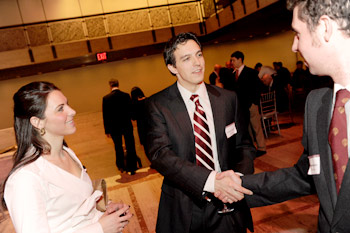 Tim Bassett (FCRH ’08) says he is happy to support the University that supported him
during his battle with thyroid cancer.
Photo by Chris Taggart

Yes, Virginia, there are Santa Clauses, and they’re right here at Fordham.

In the last five years, Fordham University’s President’s Club—which is made up of donors who make gifts to the University of $1,000 or more annually—has increased by 37 percent.

To celebrate that spirit of giving and the holiday that inspires it, some 900 members and their guests turned out for the President’s Club Christmas Celebration on Dec. 7, held at the David H. Koch Theater at Lincoln Center.

Joseph M. McShane, S.J., president of Fordham, reminded those in attendance of Fordham’s contribution to making New York’s Christmas special—Virginia O’Hanlon. As a little girl in 1897, O’Hanlon wrote to the New York Sun asking if there was really a Santa Claus. The reply from the paper’s editor, Frank Church, has become the most quoted editorial in newspaper history. “Yes, Virginia, there is a Santa Claus. He exists as certainly as love and generosity and devotion exist.”

O’Hanlon, Father McShane said, graduated from the Graduate School of Arts and Sciences in 1930, and to serve others as a public school teacher and administrator. Her faith, coupled with the editor’s eloquent reply, shaped her life and has shaped the very spirit of the New York Christmas, he said.

“Fordham helped invent the New York Christmas,” said Father McShane, who toasted the University’s supporters. “The University has thrived in its mission only because of the love, generosity and devotion of its alumni and its supporters. You believe in a University that is an occasion of grace for all students who pass through its gates.”

There were other reasons to toast the Fordham family: undergraduate alumni giving participation has climbed to 24 percent. Excelsior | Ever Upward | The Campaign for Fordham stands at nearly $307 million, more than half of its $500 million goal. And the Office of Development received nearly $72 million in gifts and pledges in fiscal year 2009.

The University was able to make good, Father McShane said, on its promise that no student would have to leave the University this year because of financial difficulty, and that employees would not face layoffs driven by the economic downturn.

But the deeply personal reasons were most resonant. Kevin Quaranta Esq. (FCRH ’78, LAW ’81) said that the values acquired through a Jesuit education have inspired a devoted alumni network that keeps giving through friendship, professional support and the shared history of Fordham. “It’s like a circle that comes around again,” he said.

Tim Bassett (FCRH ’08) summed up his devotion to Fordham in one word: kindness. Two weeks before Bassett was to start classes as a freshman, he was diagnosed with thyroid cancer. Bassett described how the University took an interest in his well-being, helping him manage his classes during arduous treatments in his freshman year and arranging for housing adapted to his needs.

“Fordham welcomed me when I was sick and unsure whether I’d be able to go to college,” recalled Bassett, who is now cancer-free. “I will never forget what it did for me.”