For generations, Jesuits have called Loyola Hall at Fordham University home. It’s where they prayed,
debated, watched sports together and carried out their commitment to a simple lifestyle. University presidents and Avery Cardinal Dulles, S.J., were among the residents.

Now Fordham is buying the Gothic building that served as a Jesuit residence since 1928 for classroom and administrative use.

“In everybody’s head this makes sense,” said Thomas Smith, S.J., superior at Loyola. “We’re aging. The building could really be put toward better use. In the hearts of people, it’s been home for many, many years. It’s a hard move. There’s a lot of sadness.”

Loyola, which once housed more than 100 Jesuit priests, is now home to slightly more than 20. Those priests will move to other Jesuit communities around the Rose Hill campus.

“Generations of Jesuits have worked here, prayed here, argued their ideas here,” David Ciancimino, S.J., provincial superior of the New York Province of the Society of Jesus, said during a homily at a Mass on April 22 at Loyola to mark the occasion. “We know we are adapting to changing times, changing demographics and a changing world.”

Father Ciancimino recalled the “spectrum of personalities” who lived at Loyola, sparking laughter, and the unprecedented increase in numbers in the 1950s and 1960s.

The move marks a transition to smaller Jesuit communities, said Peter Schineller, S.J., archivist for the New York Province of the Society of Jesus.

“This was the most important house of the province because of the people who lived here, the numbers,” Father Schineller said. “This in some ways marks the end of an era.”

Loyola Hall was one of several buildings constructed at Fordham in the years before the Great Depression.

“There’s never been a building boom like that in the history of the University,” said Robert Grimes, S.J., dean of Fordham College at Lincoln Center. 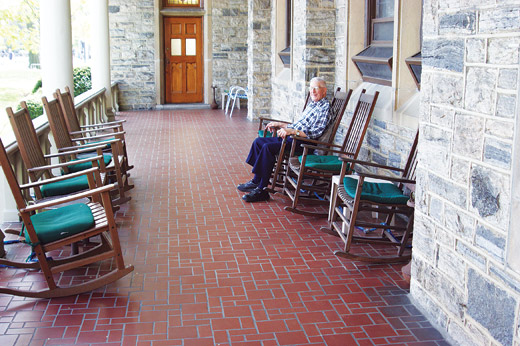 Brother Sebastian Boccabella, S.J., enjoys the expansive porch of Loyola Hall. The Jesuits will give up residence so that the University can expand.
Photo by Nicholas Lombardi, S.J.

Father Grimes said when he recently walked through Loyola Hall it felt strange not to encounter anyone. That stood in contrast to when he arrived.

“It was a very big community,” Father Grimes said. “Moving into a community of over 100 Jesuits is a little intimidating.”

Father Grimes recalled after Avery Dulles was made a cardinal there was a service and dinner. Suddenly the double doors swung open at adjacent Faber Hall.

“There was Avery Dulles in his full array of robes. It was quite a spectacle,” Father Grimes said.

Joseph Dolan, S.J., FCRH ’39, said Father Dulles, before he was a cardinal but was a well-known theologian, would cover for him at Mass at a local parish when he was busy. Dulles, who died in 2008, celebrated Mass for another priest even as a cardinal, Father Dolan said.

“That was the kind of person he was,” Father Dolan said.

At the dinner table, Father Dolan said, if someone mentioned the cardinal, referring to Edward Cardinal Egan, Cardinal Dulles would quip, “which cardinal are you talking about?”

Loyola Hall was also known for the hospitality it offered countless guests.

“I just felt at home here,” said Daniel Fitzpatrick, S.J., who lived at Loyola for 20 years until last year. “Anybody I ever brought to visit, they always felt so welcome.”

Vincent Novak, S.J., founding dean of Fordham’s Graduate School of Religion and Religious Education, said Loyola is where Jesuits carried out their commitment to a simple lifestyle, living in a single room with a shared bathroom down the hall.

“People should know Jesuit life is not one of opulence,” Father Novak said. “We live very simply. People often don’t understand how simplicity of lifestyle can be a joy.”

Father Dolan, who at 95 still celebrates Mass, said he enjoys his view of the campus, but understands the move.

“We’re not brokenhearted,” said Father Dolan, a former professor of philosophy who has lived at Loyola for decades. “We’re ready for this.”