skip to main content
Return to Fordham University
You are at:Home»Inside Fordham»Are Catholic Teens Straying from the Flock? 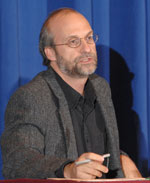 Soul Searching: The Religious and Spiritual Lives of American Teenagers (Oxford, 2005), delivered some jolting news about the religious lives of Catholic youth. “On most sociological measures, American Catholic teens… are largely indifferent to faith and practice matters,” said the book’s co-author, Christian Smith, Ph.D., professor of sociology, University of Notre Dame. Catholic teens generally came out at the low end of the massive National Study of Youth and Religion that Smith and his colleagues conducted over a two-year period.

“We asked ourselves, ‘what is up with Catholic teenagers?’” said Smith.

Smith, who is also director of the Center for the Sociology of Religion at Notre Dame, appeared at Pope Auditorium on Nov. 2 to discuss the book’s findings. The forum, “Catholic Teenagers: Faith at Risk?” was sponsored by the Fordham Center on Religion and Culture and moderated by the Rev. Edward A. Malloy, C.S.C., president emeritus, University of Notre Dame. Father Malloy, who still lives among the student population at the school, said, “I am delighted to be a part of this conversation.” 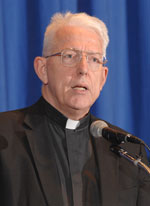 Peter Steinfels, co-director of Fordham Center on Religion and Culture, said that the large audience was the result of concerted outreach to the youth ministry programs of the New York archdiocese and Brooklyn diocese. Steinfels and his colleagues were so struck by the findings in Soul Searching that they decided to organize an event around the book.

Smith cited the difficulties in comparing across religious traditions—there are millions of Catholic teens, while some faiths have adolescent adherents only in the tens or hundreds of thousands. “When it comes to faith formation of teens, the Church in the U.S. is doing pretty badly.” He said his statement was not a “slam” on youth ministries, and that parents are the most important factor in shaping faith.

James Davidson of Purdue University praised Smith’s scholarship, but tried to put the findings about the current generation (“millennials”) in the context of older generations, from before Vatican II and just afterwards. Saying that Catholic teens “have never really been religious virtuosi,” he noted that teens today are about as likely to go to Mass as post-Vatican II adults—not significantly different from their parents.

It would be a mistake for the church to return to its pre-Vatican II attitudes, which according to Davidson, emphasized fear of Hell, but rather it should “identify factors that produce religiosity and cultivate them.” He mentioned social networks and, again, parents, as important conduits of faith.

Margaret McCarty, another member of the forum panel, spoke of her nearly three decades as a youth ministry practitioner, and said that the Church has to create an environment in which teens feel comfortable in expressing their doubts.

One of her pre-confirmation students, who had been silent for the first three weeks of class, finally raised his hand and calmly asked, “Why did Jesus get whacked?” This question, though asked in the vernacular of the modern teen, is central, McCarty said, and could only be asked in a place where the questioner felt safe from ridicule.

Panelist Alison Donahue, director of Campus Ministry at Manhattan’s Regis High School, has taken students on more than 30 retreats in recent years, calling the retreats a “window into their spiritual lives.” She compared faith to an old house that the younger generation should feel free to explore—“Sometimes the older generation does not like where they go,” she said. “(But) like Ignatius, they can find God in all things.”

Donohue said that youth do not see uncertainty as a weakness: a class she began on Zen Buddhism was oversubscribed. The church and its elders need to be more tolerant and welcoming, she said. “We risk alienation if we try to save the church as we know it.”

Smith, who wrote Soul Searching with Melinda Lundquist Denton, pointed out that Catholics should not necessarily compare themselves to other religions in terms of faith practices and adherence. “The standard should not be against some other group,” he said.

The evening’s discussion returned consistently to the role of adults, with Smith saying, “It’s important to see mom and dad care about something … not (just) to recite the Catechism up and down.”

Though Smith’s book paints a pictureof Catholic youth as less interested in their faith than peer groups in other faiths, some panelists expressed hope in connecting with this population, capitalizing on their intellectual and spiritual hunger.