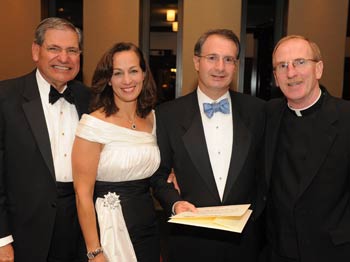 Thomas P. Salice, CBA ’82, and Susan Conley Salice, FCRH ’82, who recently gave $7 million to build new residence halls on the Rose Hill campus, were inducted on Oct. 20 into the Archbishop Hughes Society along with 23 other members.

The new initiates were honored at the second annual Archbishop Hughes Society dinner, which celebrates Fordham’s most generous benefactors. Salice and Conley Salice received a crystal Steuben ram from Joseph M. McShane, S.J., president of Fordham, as a token of appreciation from the University.

“To see Tom and Sue and their families up here is to see Fordham history before our eyes,” Father McShane said, as the couple posed for pictures with their parents. “Fordham University has always been about making dreams come true, about young men and women who come to Fordham with the dream of making a better life for themselves. We are able to look at that dream come true for these two families.”

More than 80 guests attended the event, including various benefactors who were inducted into the society at last year’s dinner. John Tognino, FCLS ’75, chairman of the Fordham Board of Trustees, told the society members and their guests that they are appreciated and celebrated for playing a major part in Fordham’s history.

“This dinner, this celebration, embodies the spirit of our beloved University,” Tognino said. “Never before has the University held such promise—a promise inspired by its timeless values, its place at the crossroads of the world and a restless intent to realize its destiny.”

Salice and Conley Salice met on the A train as Fordham undergraduates, while chaperoning a group of Bronx schoolchildren to a baseball game. Since then, they have continued down the track of service to others.

Father McShane said that the couple wanted to name the dormitories—Salice and Conley Halls—after their parents, since it was their parents who taught them every important lesson in life.

“Their parents made it possible for them to go to Fordham, and this way they can make sure their parents are always remembered at Fordham,” Father McShane said.