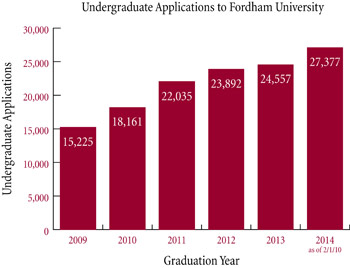 Three years ago, Fordham shattered its applications record with a pool topping 20,000.

Today, undergraduate applications at the University have surpassed the 27,000 mark, setting yet another high.

As of Feb. 1, the undergraduate applications pool had hit an unofficial tally of 27,377—a 14 percent increase over last year.
This marks the 19th consecutive year that the number of students seeking admission to Fordham has increased, said John W. Buckley, associate vice president for undergraduate enrollment. Applications have doubled since 2003.

“Fordham is a school that has had terrific momentum for a while now,” Buckley said. “It has always had a fine reputation, but that reputation has been enhanced in recent years. In my conversations with counselors, many of them refer to Fordham as a ‘hot school.’”

The record-breaking number was helped by an all-time high in early action (EA) admission applications, which increased 17 percent over last year. In addition, Fordham logged huge increases in its EA applicants from outside its traditional regions of activity, especially from the distance markets of Illinois, California and Texas.

Buckley noted that the trend among EA applicants is also mirrored, to a degree, in the traditional admissions pool, which logged healthy applications increases over last year from the Plains/Rockies states, the West and the Southwest states.

The number of international applications jumped 26 percent this year.

While the traditional Northeastern admissions pools are expected to wane over the coming decade due to demographic shifts, Buckley said that this cycle’s traditional markets still look very strong.

He attributed the across-the-board increased interest in Fordham to successful direct marketing campaigns that focused on students who are “a good fit” for the Jesuit University based on test scores and self-reported academic information. In addition, Buckley noted that the open house visits to the Lincoln Center and Rose Hill campuses logged 2,200 students, up 9 percent over last year. Such visits, he said, are a critical part of the process.

“Once we have the students and their families on campus, we know that we have a much stronger chance of eventually getting them to enroll,” Buckley said.

All student acceptance notices will be sent out by April 1.

“Last year, Fordham enrolled an academically talented freshman class that was above our target,” Buckley said. “Now, we face the challenge of replicating that success.”