skip to main content
Return to Fordham University
You are at:Home»Inside Fordham»Appellate Judge Troubled by “Insidious” If Well-Intended Bias on Bench 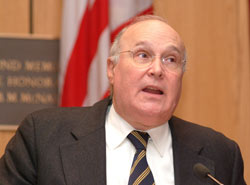 The judiciary has an inherent and insidious bias in favor of legal procedures and solutions, said Chief Judge Dennis G. Jacobs of the 2nd U.S. Circuit Court of Appeals in New York. Delivering his first speech since becoming chief judge as part of Fordham Law School’s John F. Sonnett Memorial Lecture in McNally Amphitheatre on Nov. 20, Jacobs said the bias has led to an expansion of judicial influence over nearly every sector of society from schools and prisons to religion and medicine.

Jacobs made clear that the bias is not a political one, but one that places legal thought and solutions above all else in society.

“The tropism in favor of what lawyers do and the tendency to expand the spheres of activity in which lawyers act and control comes clothed in virtue,” Jacobs said. “It is seen by us mainly as respect for due process, as the open door to the courthouse, as a flower in the rule of law. So any excesses are viewed with indulgence as a Tocquevillian quirk of the American character.

“But it is unbecoming of judges to dismiss this phenomenon. It matters that our conduct as judges is reinforced by the support and praise that we get from colleagues, lawyers, bar associations. … I think fair-minded people should recognize the dangers that arise when judges, as the final arbiters for allocating vast power, money and influence, are all members of the same, self-regulating profession and often the same professional groups and social environments.”

The “inbred” preference by judges to find solutions to public policy and other issues through the legal process is infused, he said, with a kind of smugness that such procedures “produce the best results.”

For Jacobs, the end product of such a bias is the expansion of legal influence at the expense other professions. “When lawyers present big issues to courts, the judges receive the big issues with grateful hands, and tell the bar it has made inroads on jurisdiction and independence and praise the expansion of legal authority and together we smugly congratulate ourselves on expanding what we are pleased to call the rule of law,” he said. “Among the results is the displacement of legislative and executive power, the subordination of other disciplines and professions, and the reduction of whole enterprises and industries through damages.”

As to what can be done, Jacobs called on judges to exercise self-restraint and discipline in order to ward off a bias that he said has gone mostly overlooked in the legal profession.

“The country could do worse than suffer rule by lawyers,” he said. “I would prefer a tyranny of law to life under a military regime. But outside our professional sphere, the dominance of law, the legal profession and the judiciary is resented more than we appreciate. As a matter of self-awareness and conscience, judges should accept that the legal mind is not the best policy instrument and that lawyer-driven processes and lawyer-centered solutions can be unwise, insufficient and unjust.… For the judiciary this would mean a reduced role, but not a diminished one.”