skip to main content
Return to Fordham University
You are at:Home»Inside Fordham»Apostolic Nuncio Touts Freedom and Solidarity as Keys to Global Recovery 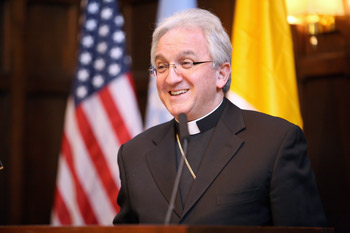 Archbishop Celestino Migliore says Pope Benedict XVI wants to promote the concept of fraternal affection, which is absent from the modern world.
Photo by Bruce Gilbert

Archbishop Celestino Migliore, Apostolic Nuncio and Permanent Observer of the Holy See to the United Nations, shared his thoughts on Caritas in Veritate, a recent papal encyclical, in an appearance on Jan. 28 at the Rose Hill campus.

The encyclical, whose title means “Charity in Truth,” was the first social encyclical issued by Pope Benedict XVI. According to Archbishop Migliore, it is meant to provide guidance for clergy and lay Catholics who are wrestling with the drastic changes that have affected the world economy over the last 20 years.

In that time, he noted that four distinct social phenomena have arisen:

• The eclipsing of traditional ideologies by one rooted in technology, to the detriment of cognitive abilities of reason;

• The ascent of globalization;

• The return of religion to the limelight and a corresponding rise in secularism;

• The rise of underdeveloped states, which alters the global political equilibrium.

Regarding the global financial crisis, he quoted Pope Benedict’s assertion that the world is in trouble because of the lack of clear thinking.

One of the biggest challenges facing the world is avoiding an economic recovery that does not address unemployment, Archbishop Migliore said, adding that such a recovery would be hollow. He dismissed greater consumption as a way out of the crisis, as it may increase profits, but not jobs, as technology now substitutes for labor.

“There needs to be a change in the composition and pattern of consumption—less consumption of merchandise, more consumption of relational needs,” he said. “Relational goods entail medical care, education, culture, art, sport—all things which build up the person and involve the most intensive labor, because no machine can substitute for the service of care and education of culture.”

Also, pointing out that Pope Benedict explicitly links freedom of life and religious choice to economic development, Archbishop Migliore pointed to the Pope’s exhortation to infuse solidarity and fraternity into economics.

“This is one of the most normative points in this encyclical, and also one of the most difficult points to understand, and especially problematic in this country,” he said.

Rather than mistake the Pope’s encyclical as an attack on capitalism, he urged the audience to remember that the French Revolution, which was an inspiration for the American Revolution, was based on the concepts of liberty, equality and fraternity.

“Liberty and equality have been received into constitutions all over the world—and they’ve changed the world. We are seeing excesses in the fields of liberty and equality. The missing link is fraternity. Fraternity has been neglected,” he said.

“As society becomes ever more globalized, it makes us neighbors, but does not make us brothers.”