skip to main content
Return to Fordham University
You are at:Home»Inside Fordham»Andrew Ma: From Jersey Boy to Master Marketer

On a recent spring afternoon, Andrew Ma arrived at Columbus Circle on a thin-wheeled fixed-gear bike sporting a pair of Ray-Bans and an affable demeanor. As a native of Bergen County, N.J., Ma is a Jersey boy at heart—albeit one with a New Yorker’s sense of ambition. 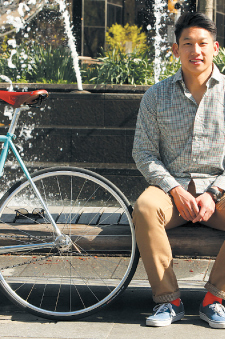 Andrew Ma said that most of his classmates know him as “the bike guy” for his fixed-gear bike, which takes him everywhere.
Photo by Tom Stoelker

Ma’s parents emigrated from Taiwan in 1980 to join relatives in northern New Jersey. Although both parents had attended college, they emigrated before finishing their degrees.

In some sense, Ma said, it fell to him to pick up where they left off.

Ma was recruited on a soccer scholarship to New Jersey Institute of Technology (NJIT), which seemed a logical path to follow. But after arriving at NJIT, Ma quickly realized that math and science were not a natural fit. Instead, he took up business management and, after college, landed a plum job in field sales at Philip Morris. But not without the consternation of his parents, who were concerned about a professional association with tobacco.

Ma, too, was concerned, but he also understood the value of working for one of the world’s oldest and most successful brands—and, he added, Philip Morris takes excellent care of its employees. Indeed, he cited the company’s support of continuing education as a major factor that pushed him toward pursuing an M.B.A. at Fordham’s Graduate School of Business Administration.

With the tobacco market in America growing smaller, Ma thought it prudent to grab the opportunity to go back to school. Indeed, after five years of working in the shrinking New York tobacco market, he was eventually laid off. As part of his severance package, the company paid for the remainder of his education. Ma pursued his M.B.A. full-time with a concentration in marketing and finance.

“I am proud that I worked at Philip Morris, but I was ready to move on,” he said.

Segueing from full-time employee to full-time student was made easier by GBA’s flexible programming.

“Most other MBA programs, you’re either full-time or you’re part-time,” he said. “The option to veer between the two was a great thing.”

“Four courses pulled everything together for me,” he said of Data Driven Marketing Analytics, Marketing Strategy, Strategic Branding, and Business Policy. “Those classes molded my thinking and helped me figure out what I wanted to do.”

The analytics class helped Ma filter through data to map strategy, branding helped him define the story to advertise brands, and business policy provided an all-of-the-above perspective, encompassing every aspect of business.

While the classwork gave Ma the tools he needed on the job, GBA’s networking culture laid the groundwork for the next phase. He joined the marketing society, finance society, and real estate club. It was at a brand management panel that he met panelist Matthew Howe, a marketing manager at Matrix, a L’Oreal brand.

“I reached out to him to have an informational interview and we had a great conversation that eventually led to the job I have now at L’Oreal,” he said.

With his M.B.A. complete and a job lined up, Ma is planning the next chapters of his life. He foresees an opportunity to work for L’Oreal in Asia. He’d like to work in his parents’ hometown of Taipei, “and then come back to L’Oreal in the United States as a vice president.” His parents, he says, are proud.

“One of the biggest things my father ever wanted was for me to have the chance to do the things that he wanted to do but couldn’t,” he said. “Now, he’s like, ‘Maybe in a couple of years you can get your Ph.D.,’ and I’m like, ‘Dad, I think I’m done… for now.’”