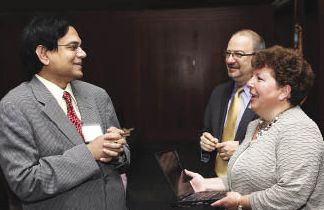 Data analytics is the way of the future, and companies will need graduates with advanced analytics skills to remain competitive, according to panelists at the Symposium on Next-Generation Advanced Analytics, held on Oct. 19 at the Lincoln Center campus.

Cell phones, social media and other Internet applications are providing a tremendous amount of unfiltered information, creating an “explosion in the data world,” according to Karen Parrish, vice president of public sector industry solutions for IBM’s software group.

“Part of the value of analytics is that we can parse valuable data from non-valuable data,” said Parrish, who delivered the keynote address. When used efficiently, analytics can uncover business trends, prevent disease and help in the fight against crime.

The event, which was co-sponsored by IBM, coincided with the launch of the Center for Digital Transformation, which will join leaders in industry and academia to conduct research and develop curricula about business analytics. The symposium and center are part of an ongoing collaboration between Fordham and IBM to prepare students for jobs of the future.

“There is a critical need to study the digital transformation in order to teach the next generation of leaders, who must have a much more sophisticated grasp of the complex interconnectedness of business and society,” said Stephen Freedman, Ph.D., provost of the University.

Fordham and IBM began working together in 2009, Parrish said, because “we both recognized that there is a massive future in the space of analytics.” She described the crucial elements and trends in the emerging discipline, and what is required to do it well—something that remains a challenge for most industries.

Predictive and prescriptive analytics, Parrish explained, relate to predicting the future based on the past.

“Some of the forerunners in this space are retailers who spend millions of dollars building analytical systems,” she said. “Based on what you bought yesterday, they try to determine what you are going to buy tomorrow.”

Prescriptive analytics speaks to finding the best outcomes—an area where healthcare probably will lead the way.

In 2009, it was “predicted that 30 percent of the world’s data will be medical information,” said Walter Groszewski of Smart Room, a health IT solutions company. But the numerous collection points for patient data, he said, make it incredibly challenging to coalesce.

“This is an industry that is dying for your help,” he told students.

Perhaps the most important aspect of analytics is that the data needs to be presented in a user-friendly fashion, Parrish said. “Technology can have a great ‘wow’ factor, but if it is not consumable by you and me, we won’t use it.”

For example, when IBM built the Real Time Crime Center for the New York City Police Department (NYPD), Deputy Chief Ruben Beltran stressed to Parrish that “it has to work for cops.”

Beltran, executive officer of information technology for the NYPD, said the officers were skeptical about the system until it helped solve a pizzeria robbery.

Investigators couldn’t track down their prime suspect. Based on past data, the Real Time Crime Center produced a new address for him. When officers arrived at that address, Beltran said, “He was right on the other side of the door.”

The event concluded with a panel of IBM executives and Fordham faculty members fielding questions on the future of analytics. They responded to the idea that the United States unemployment problem is due to a lack of relevant skills in the workforce.

“The U.S. Bureau of Labor Statistics said that there will be a 24 percent increase in the need for professionals with management analytic skills over the next eight years,” said Marianne Cooper, a managing director at IBM. “Employers will be asking, ‘What skills do you bring to the table that differentiate you?’”