skip to main content
Return to Fordham University
You are at:Home»Commencement»An Education Driven by Faith, Family, and Community
Chibuzor Uwadione’s sons, ages 1 and 9, were his chief motivation for returning to school to earn a degree.
Determination, balance, and the setting of priorities—these are the key factors that helped Chibuzor Uwadione complete his bachelor’s degree while also working full time and being a devoted husband and a father to two young boys.

In fact, Uwadione’s sons, ages 1 and 9, have provided the most important motivation during his years at Fordham’s School of Professional and Continuing Studies, where he earned a degree in organizational leadership with a minor in economics. 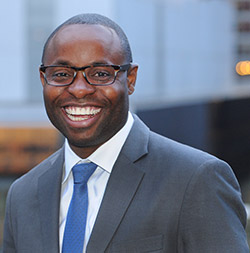 Chibuzor Uwadione graduates with a degree in organizational leadership.
(Photo by Chris Taggart)

“I know the importance of my degree not just for myself but also for my children,” he said. “I want to live a life of exemplary conduct. I want to be able to say, ‘Well, I could do this and you should be able to do it.’”

Originally from Nigeria, Uwadione has been living in New York for 12 years. He was drawn to study at Fordham not just by its academic reputation, he said, but also because of its Jesuit traditions.

“Fordham is unique in that there are elements of faith that are part of the academic community, and that is something that you don’t find everywhere,” he said.

For Uwadione, who is of the Bahá’í faith, the sharing of spiritual life is of central importance. Each month, he hosts up to 25 people in his home for a “tranquility zone,” an evening of meditation and conviviality.

“It is a devotional gathering, a place where people of different faiths, or of no faith, will come together once a month and we eat, we pray, and we play,” he said.

This concern for the creation of peaceful communities led Uwadione to a course in philosophical ethics taught by Gerard Farley, PhD, adjunct professor in the Department of Philosophy.

The course resonated deeply for Uwadione because it examined the role of ethics in daily life, a topic of particular concern for him, he said, “coming from a country where corruption has pretty much plagued the system.”

Uwadione works in supply chain management and is the director of operations at a small logistics company. He plans to use his degree to advance in his career, but just as important, he wants to continue the community service that plays a large role in his life.

He serves as president of the regional Ndokwa Association in America, a not-for-profit cultural organization dedicated to improving education and living conditions in a region in Nigeria. Uwadione also serves as the chairman of the association’s national scholarship board, which funds African students who excel academically but who cannot pay for their schooling.

In his own education, Uwadione’s steadfast pursuit of excellence has paid off. In 2015, he was inducted into Alpha Sigma Lambda, the national honor society for adult students, and in the 2015-2016 academic year he was the recipient of the Morton Levy Scholarship.

Though he leaves Fordham this spring, Uwadione says his ties to the school University will always be strong.

“Fordham is now family. Once you are a member of the family of academics you are there forever.”