skip to main content
Return to Fordham University
You are at:Home»Colleges and Schools»Graduate School of Arts and Sciences»Ambassador, in Gannon Lecture, Shares Insider’s View of U.N. Elections

In an unusually personal address about the diplomatic corps, Ambassador Anne Anderson, Ireland’s representative to the United Nations, pulled back the curtain on the inner workings of U.N. elections.

Anderson, a visiting member of Fordham’s faculty, spoke on April 18 at the Graduate School of Arts and Science’s (GSAS) Gannon Lecture, “United Nations Elections: Power, Influence, Reputation.” Ambassador Anderson recently became the first woman to be named Ireland’s ambassador to the United States, a post she will take up this year. 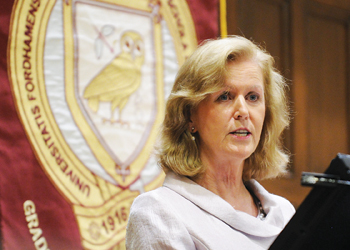 “For us diplomats, even more so than in most other walks of life, the personal and the professional are intertwined,” said Anderson.

She called her fellow diplomats “itinerants” whose common bond is often the transient nature of their profession. One way to gauge the strength of such friendships, she said, was in the manner in which colleagues vote during U.N. elections.

Anderson said that such elections provide a snapshot of how things get done at the United Nations, which she described as a “sprawling, complex organization,” and allow observers to view “the bones and sinews, and judge what we find attractive and unattractive” about the process.

“Despite undoubted blemishes, the United Nations will always continue to speak to what is best in all of us,” she said.

Anderson first focused on the U.N. “non-elections”—the unelected permanent members of the Security Council, known as the P5: the United States, Russia, China, United Kingdom, and France. She said their position on the 15-member council, which provides them with higher status and veto power, was an anachronism and is in urgent need of reform to balance out power.

Ireland, she said, was elected to a two-year term on the Security Council in 2000 and elected to the Human Rights Council (HRC) in 2012. The HRC is gaining clout, she said, as a result of a stagnant Security Council held back, in part, by a fractured relationship between two permanent members: the United States and Russia.

Nevertheless, the 10 rotating seats on the council remain a plum prize, with U.N.-member nations spending an increasing amount on campaigns for those seats. In 2000, Ireland spent nearly $1.2 million, while Australia spent upwards of $25 million. It’s a trend that concerns the ambassador.

“If extravagant spending becomes the norm, it follows that those with deep pockets will be advantaged and those with limited resources will be edged out,” she said.
Over recent years, she said, there has been “an increasingly pronounced sense of entitlement on the part of large states” developing at the U.N.

While smaller nations such as Ireland have a level of voting solidarity through the Forum of Small States, their sway often comes through personal contacts and influence, she said. In fact, a nation’s reputation, especially in building such personal relationships, is “a brand of currency.”

Through a process called “reciprocals,” an agreement is made between two diplomats where one diplomat will vote for the other’s cause in exchange for support later.

“Power speaks with a loud voice; influence adopts a softer tone,” she said.

She noted that influence sometimes gave the smaller states an edge, especially if the states shared a similar history, such as an emergence from colonialism.

“Attraction can have quite a complex chemistry, but it is essentially built on liking and respect,” she said.  “Neither of these sentiments can be switched on in the course of a campaign. Both are normally built up over time.”

The Gannon Lecture is delivered in the fall and spring of each year and is named for Robert I. Gannon, S.J., president of Fordham from 1936 to 1949. 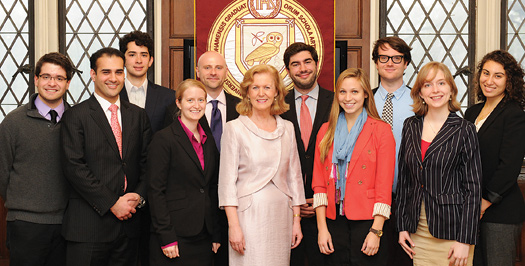 U.N. Ambassador Anne Anderson, center, who has been named as Ireland’s Ambassador to the United States, has been guest-teaching a GSAS seminar this year. She is pictured with her students.