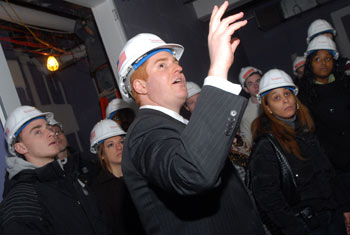 An accounting student while at Rose Hill, Colletta, 30, admitted his heart wasn’t in that field. “I just didn’t want to be an accountant,” he said.

Luckily, an internship opened his eyes to the world of construction. Today, he is vice president of F.J. Sciame Construction Co., an award-winning firm based in Lower Manhattan.

“CBA gave me a solid foundation that I use every day,” Colletta told a group of CBA students that toured one of Sciame’s latest projects. “I went to the business side and understood all the numbers. As I got into these projects, I realized that what I learned transferred into project management.”

The nine-story, 175,000-square-foot tower, designed by architect Thom Mayne and his Morphosis firm, in collaboration with Gruzen Samton, will house the departments of architecture, engineering, humanities and social sciences. There are 350 Sciame construction workers on site. The building is slated to open in fall 2009.

The facility, which is billed by the firm as a “vertical campus,” has a LEED Platinum rating—the highest rating by the Leadership in Energy and Environmental Design (LEED) Green Building Rating System. The building’s state-of-the-art radiant heating and cooling technology will conserve energy and increase efficiency. An outer layer of semi-transparent mesh screen will create coolness in the summer and warmth in the winter by controlling daylight, energy use and natural ventilation.

Carbon dioxide detectors throughout the building will automatically dim power and ventilation when rooms are unoccupied—saving energy and costs. A co-generation system will produce some power for both the new building and Cooper Union’s Foundation Building, reducing the need to tap into the outside electrical grid.

The deck surface of the green roof will be covered by a layer of low-maintenance plantings, which help to reduce city “heat island” effects, stormwater runoff, noise, air conditioning costs and heat demand. Together with the low-flow plumbing devices, the green roof will save more than 600,000 gallons of water annually.

“Some things may look weird, but they are innovative,” Colletta told students clad in hard hats as they toured the building in late February. “This is a super-sustainable building. The idea of it is that there is constant movement in the building.”

The $150 million project is just one of several large projects Colletta has overseen. He handled the construction of the Toys “R” Us flagship store in Times Square, which won Construction News’ “Retail Project of the Year” designation in 2002.

“All of this goes back to my foundation at Fordham,” Colletta said. “I worked hard [at Fordham], but I loved it, and I love what I do now. I’m able to get involved in something different in every part of my job.”