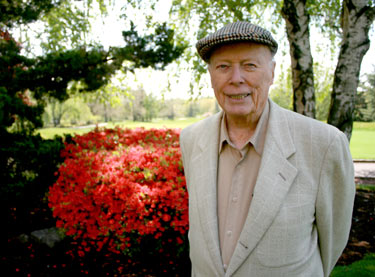 George E. Doty, FCRH ’38, has given to Fordham every year since 1957.
Photo by Patrick Verel

Like clockwork, Fordham can count on George E. Doty, FCRH ’38, the man who has given more consistently than anyone in the University’s history.

Every year since 1957, Doty, a former chair of the Board of Trustees and managing partner of Goldman Sachs, has lent his support. His gifts have bolstered several University initiatives, including:

• $1 million to establish the Marie Ward Doty University Chair for the Aging;

• $1.5 million to help renovate the University Church; and

Altogether, he has given $3.8 million to Fordham.

Doty worked the night shift at an incinerator on West 56th Street during the height of the Great Depression to pay for his tuition. Although it’s been 72 years since he graduated, fond memories of his time at Rose Hill have stayed with him.

“I was fascinated by the mind-stretching that occurred as part of my Jesuit education, particularly in the third and fourth years when we got into psychology and philosophy,” he said. “I later went to Columbia to get a master’s degree—and the faculty members there were all people in President Roosevelt’s brain trust—but I never got the same mind-stretching experience that I’d gotten at Fordham.”

That education enabled him to work for 17 years at the accounting firm of Lybrand, Ross Bros. and Montgomery before joining Goldman as a partner in 1964.

“We recruited people from all the best universities and graduate schools, and I never felt at an intellectual disadvantage to anyone I ran into there,” he said.

Doty said the idea for his gift to help restore the University Church came in part because his wife, the late Marie J. Ward Doty, noticed that the kneelers needed work. Just as he and a cadre of other successful alumni helped Fordham negotiate a period of financial uncertainty in the early 1970s, Doty said he merely did what needed to be done.

The couple’s generosity also has benefited the intellectual life of the University. Recipients of honorary law degrees in 1981, the Dotys created the Dr. M. J. Werthman, GSAS ’85, Memorial Endowed Scholarship, which supports female graduate students who are engaged in the study and clinical treatment of mental illness. For his generosity, Doty was honored as an inaugural member of the Fordham University Hall of Honor during Jubilee Weekend in 2008.

Looking back, Doty said that Fordham helped strengthen his faith. While attending the private, nonsectarian Collegiate High School in New York, he sometimes felt like he needed to be a defender of Catholicism. But at Fordham, he discovered intellectual rigor built on a strong religious foundation that felt right.

“If I did not have the Catholic faith and I wanted to invent a faith for myself, what would I do? I think I would reinvent the Catholic faith. It may sound foolish, but I think of a loving God, a forgiving God. How can you beat that?” he said. “So I guess I’m convinced both on faith and on logic that Fordham is the best place to be.”