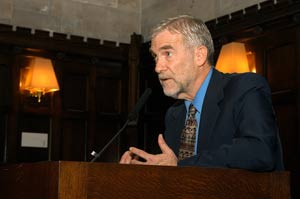 A former CIA intelligence analyst, antiwar activist and Fordham University alumnus urged graduating students in the Peace and Justice Studies Program to follow their consciences when they see injustice, reminding them that to do so often requires courage and risk.

Ray McGovern (FCRH ’61, GSAS ’62), co-founder of Veteran Intelligence Professionals for Sanity (VIPS), and a CIA analyst for 27 years, called the Bush administration’s justification for the Iraq war “95 percent charade” and warned against the loss of constitutional rights through a censored press and lethargic public.

“The cardinal sin in intelligence work is to fix the intelligence to suit the policy,” he said, referring to the Bush administration’s efforts to portray Saddam Hussein as harboring weapons of mass destruction. “They were trying to justify the unjustifiable—the Iraq war. Peace is nothing more than the experience of justice, and you can’t have justice without truth. We can change things, but it requires sticking our necks out.”

“I worked under nine [CIA] directors,” he said. “It was possible [then]to seek the truth and then speak the truth to power, and most of them had the integrity to speak. Now, that word accountable, it has been banned in Washington, D.C.”

McGovern co-founded VIPS in 2003, when there was evidence that intelligence analysis was being inappropriately manipulated by the Bush administration to justify the invasion of Iraq. The group consists of 61 former professionals from the CIA, FBI, National Security Agency and other U.S. intelligence agencies.