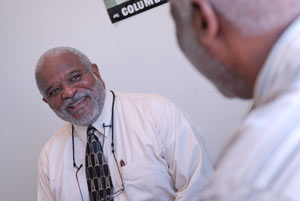 Members of the Fordham University Department of African and African American Studies had an emotional reunion on Sept. 13 with a man who was among the founders of the department during the civil rights movement of the 1960s.

Quinton Wilkes, Ph.D., (GSAS ’69, GSAS ’77), the first black male student to earn a doctorate in psychology at Fordham and a Fordham faculty member from 1969 to 1976, returned to the Rose Hill campus as a guest of the Bronx African American History Project. The project recorded his nearly four hours of recollections of the Bronx and his involvement in helping establish a department of African American studies at Fordham.

Wilkes said that soon after he arrived at Fordham in the 1960s, he became involved with a group of black students who began talking about “the need for a black studies program at Fordham.”

“With the increasing movements taking place at other colleges, we started advocating for this change,” Wilkes said.

The desire to establish an African American studies program at Fordham would ultimately lead to protest, he said. In 1969, Wilkes and other students staged a sit-in at the office of Martin Meade, who was then Fordham’s dean of students.

“Eventually, Meade agreed to our request,” he said. “We certainly didn’t have a sense of how important it was at that time. It was a tremendous effort by a lot of people and look what it has led to today.”

Today, Fordham offers a major and a minor in African and African American studies and the department is home to seven faculty members. It is also home to the Bronx African American History Project, which is “dedicated to uncovering the cultural, political, economic, and religious histories of the more than 500,000 people of African descent in the Bronx.”

The project is developing a database that will include oral history transcripts and audiotapes for use by scholars, students and others doing research on people of African descent in New York City.

The trio recalled old times, spent largely in a small office on the second floor of Dealy Hall on the Rose Hill campus, where faculty members in the department were housed in the 1970s and 1980s.

“Wow, all this is yours?” Wilkes asked Naison and Mangum as he looked around the department’s offices now on the sixth floor of Dealy Hall. “I’m impressed.”

Mangum quickly turned the compliment around. “This is your legacy,” he said to Wilkes.