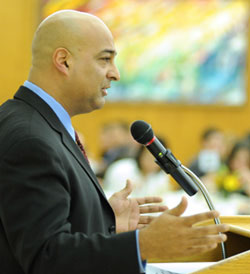 Angel Rivera (FCRH ’83) instructs students in how to deal with ethic or racial humor in the workplace.
Photo by Chris Taggart

Members of Generation Y, also known as the Millennial Generation, may be experiencing a tough job market, but they also face another challenge—negative perceptions of hiring managers and future co-workers.

To succeed, Millennials must work hard, seek guidance and avoid the pitfalls that every worker has faced early in their careers, a Fordham alumnus told a group of undergraduates on Nov. 4 at the Rose Hill campus.

“There is a perception that your generation is spoiled and entitled, lazy, self-centered and not committed to work. You have to prove them wrong, but you must also take steps that will help you succeed,” said Angel Rivera (FCRH ’83), chief diversity officer at Kingsborough Community College/City University of New York.

Most recently, he served as national director of affirmative action and diversity at the Screen Actors Guild in Los Angeles.

Diversity in the workplace doesn’t just apply to race, gender and religion, but having policies that provide equal treatment for people with disabilities, he said.

Rivera cautioned the more than 130 students in attendance against having workplace discussions about religion or politics, or making jokes that generalize about ethnic or racial groups. He recalled an awkward situation in which the CEO of a large advertising agency made an ethnic joke during a one-on-one meeting.

“I looked down at my feet and said, ‘I forgot something in the next room; I’ll be right back.’ When I returned, the subject was changed and I avoided the joke, but it was pretty unbelievable,” he said. “But that’s life, and you have to avoid these situations.”

Rivera gave advice on what has helped him get ahead in his career.

“Have a mentor. I found one at the Screen Actors Guild and he happened to be a Fordham alumnus who is still a good friend today,” he said. “Also, know the corporate culture and look to see that the company’s values are in line with your personal values. Try to avoid office gossip because it can get you in a lot of trouble.”