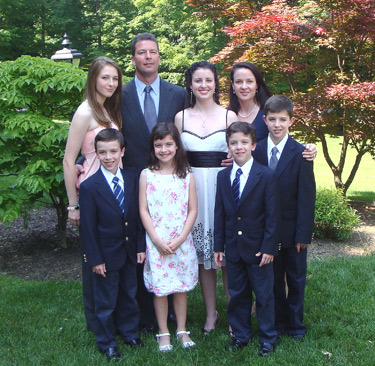 Like many alumni, Jim (CBA ’85) and Joanne (CBA ’87) Kastberg had long considered making a gift to Fordham. Without scholarships in football for Jim, and in track and cross-country for Joanne, neither would have been able to attend the University.

For the Kastbergs, the question was not whether to give, but whether to support a high-profile athletics program such as basketball or football. In the end, their children helped them decide how to direct their generosity—a $60,000 pledge to match gifts to the Women’s Athletics Cornerstone Fund, a general fund for all women’s sports at Fordham.

“We have six children and three of them are girls, and they’re all athletes,” Jim Kastberg said. “We wanted to do something that had the most impact. So we thought to be a little different and establish a giving challenge.”

For three years, the Kastberg Women’s Athletics Challenge has earmarked up to $20,000 that will provide a dollar-for-dollar match on cash gifts above a certain threshold—a threshold that moves higher in each of the years.

The Kastbergs’ connection to Fordham brought them success in business, and—in a roundabout way—in love. Though they never connected during their years at Rose Hill, after graduation Joanne Krebs landed a job at Spicer & Oppenhiem, an accounting firm that audited Evergreen Asset Management, where Jim was working.

“It was pretty ironic. We clearly ran into each other at Fordham, but I guess there was no impact,” said Jim, who retired in June 2008 from Argent Financial Group, where he had started his own hedge fund six years earlier. “We had a lot of similar friends and went to similar events, but nothing happened.”

In addition to the educational opportunities that collegiate athletics provided the Kastbergs, they noted that balancing academics with team obligations was a great primer for life after college.

“Athletics help you focus on academics because, in addition to your studies, you have team obligations to attend,” Joanne Kastberg said. “Successfully balancing academics and athletics prepares you to balance your job with your other responsibilities after graduation.”

“The Women’s Athletics Cornerstone Fund was created to ensure that women’s athletic programs at Fordham have the resources to be successful on and off the field,” said Frank McLaughlin, executive director of intercollegiate athletics and recreation. Among other purposes, it is used to recruit students for programs such as women’s swimming and diving, which this year captured its first Atlantic 10 championship.

Indeed, giving back resonates with the Kastbergs.

“We believe in the Jesuit ideal, that to whom much is given, much is expected,” Jim Kastberg said. “I wanted to make sure that current students who come from backgrounds like ours have opportunities as well.”