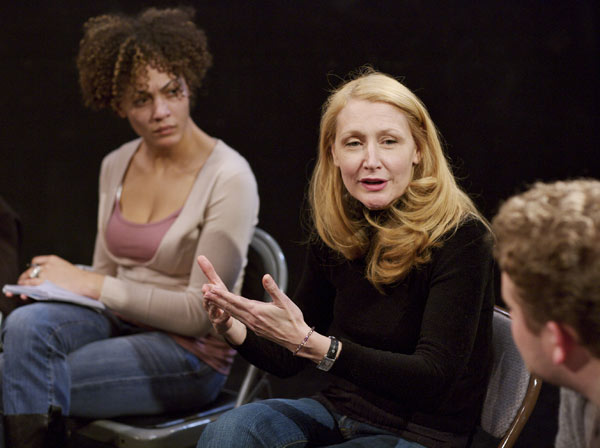 Actress and alumna Patricia Clarkson speaks with Fordham drama students in the Black Box Theatre at
the Lincoln Center campus.

Emmy Award-winning actress Patricia Clarkson (FCLC ’82) returned to the Black Box Theatre at the Lincoln Center campus on Dec. 10, where she told aspiring performers that acting is the only thing she has ever wanted to do and couldn’t imagine doing anything else.

“But,” she warned them, “it’s a very competitive business and it’s a long and difficult road.”

Clarkson’s work has spanned nearly two decades on Broadway, in films and on television. Soon after graduation, she landed her first film role in the 1987 movie The Untouchables. She has since appeared in more than 25films and acted in some 30 stage productions, including the Broadway plays The House of Blue Leaves and Eastern Standard.

Her turn as Sarah O’Connor in the HBO series Six Feet Under won her an Emmy in 2002, and she was nominated for an Oscar in 2004 for her role in the film Pieces of April. Her most recent film is All the King’s Men, which was released in September, and she’s been cast in four films that are scheduled for release over the next two years.