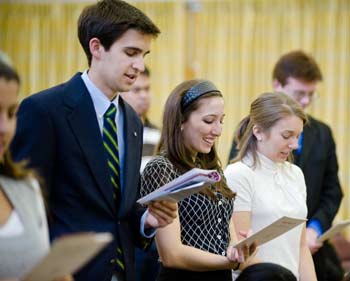 Nearly 100 Fordham students and three faculty members were inducted into the Jesuit academic honor society Alpha Sigma Nu at a ceremony on April 3.
The event also included awards for five faculty authors whose recently published books were feted by the society in its annual book competition. Fordham authors won three of the four prizes, which were open to faculty and administrators at all 33 Jesuit colleges and universities. Fordham’s winning entries are as follows.

For Communication:
A Century of Media, A Century of War (Stanford Business Books, 2007) by Robin Andersen, Ph.D., professor of communication and media studies

For Business and Administration:
The Culture and Commerce of Publishing in the 21st Century (Peter Lang, 2006) by Albert N. Greco, Ph.D., and Robert M. Wharton, Ph.D., professors of business; and Clara E. Rodriguez, Ph.D., professor of sociology

“It shows to all the world, and especially all the Jesuit schools in the United States, that this is Fordham’s moment—an altar to greatness, greatness built on our faculty, their wisdom, their dedication, their great devotion to our students,” said Joseph M. McShane, S.J., president of Fordham.

The ceremony, which was held at the McGinley Center Ballroom on the Rose Hill campus, ended with the student inductees receiving membership certificates and pins. In his remarks, Father McShane credited the honor students with embodying the principles of Jesuit learning.

“Through your studies, your love of learning and your devotion to service, you have made the ideals of Jesuit education come alive in our time and in our midst,” he said. “Jesuits look at you as colleagues in the great ministry of education—a ministry that we think is sacred.”