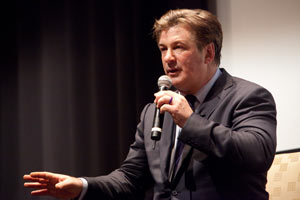 The conversation with Alec Baldwin ran the gamut from advice for young actors to gun control and renewable energy.
Photo by Nancy Adler

Alec Baldwin may be best known as a goofy network executive on the hit television series 30 Rock, but on Feb. 25 at the Time Warner Center, it was Baldwin the activist, author and thespian who took center stage.

For 90 minutes, Baldwin sat with Thane Rosenbaum, the John Whelan Distinguished Lecturer in Law at Fordham Law School and director of the Fordham Forum on Law, Culture and Society, as part of “A Conversation with Alec Baldwin.”

The evening included clips from Ghosts of Mississippi, the 1996 film in which Baldwin played Bobby DeLaughter, prosecutor of the murderer of civil rights worker Medgar Evers, as well asNuremberg, the 2000 television miniseries in which he played Robert H. Jackson, the Supreme Court justice who prosecuted Nazis in the aftermath of World War II.

Baldwin’s activism on behalf of People for the Ethical Treatment of Animals, renewable energy, gun control, campaign finance reform, divorce law overhaul—all topics about which he has written extensively—got equal attention. Rosenbaum noted that Baldwin’s writing makes it easy to see why he considered becoming a lawyer before entering acting school. That, said Baldwin, was his father’s influence.

“To communicate with my father, he wanted me to come up to his level. He wasn’t going to come down to my level,” he said. “When I was 10 years old, I realized that if I wanted to have a relationship with my dad, I would have to watch the Vietnam War as it played out on Cronkite and Huntley/Brinkley and so forth.”

Baldwin said that he eventually bypassed law school because he enrolled in 1976, a year after the Vietnam War ended. It was the single most competitive year for incoming college students, he said.

New York University’s acting program was an attractive alternative, though he said that he is frustrated by how incoming students at his alma mater have the kind of GPAs and SAT scores that would earn them admission to law or medical schools.

“The kids who are in the room are the sharpest kids who have ever gone to acting school, but we can’t really say they’re the best actors,” he said. “I say to people, ‘Don’t go to college for acting. Go to school for history or literature. Get a degree in something where you’re going to have to read as many books as you possibly can.’”

For students who are, in fact, pursuing acting, he had words of caution.

“Your number one obligation in any acting program, whether it’s at a degree-granting one in a university or not, is to determine how much you really like acting, because you’re going to get to do so little of it in your life,” he said. “Musicians can play their instruments, painters can paint, writers can write, and dancers can take dance classes, but actors must always have an audience to bounce off of. Very few actors I know sit alone in a room and just riff on acting.”

Baldwin reluctantly discussed A Promise to Ourselves: A Journey Through Fatherhood and Divorce (St. Martin’s Press, 2008), the book he co-wrote about his eight-year battle with his former wife, Kim Basinger, over their daughter. He likened Los Angles County divorce court judges to pit bosses in Vegas casinos, whose obligation is to make sure everybody stays at the table and keeps gaming.

He lit up most when discussing social issues, noting that Ghosts of Mississippi was one of the films he was most excited about being a part of, because it was a chance to be involved in something socially relevant.

When it comes to nuclear energy, which he said is much dirtier in the enrichment process than is commonly understood, he was particularly unapologetic. One-tenth of $750 billion that he said has been spent in Iraq could be spent to create the “Apollo project spirit” that would bring renewable energy to the fore in the country in the form of solar panels in Arizona and wind power on the Great Lakes.

“I love my country. I’m an American. I love America. But I don’t want to see America go down, and I believe America is going to go down if we don’t get on the renewable energy tip in the next 20 to 25 years,” he said. “The Chinese are getting ahead of us. It doesn’t make sense.”

Would he consider running for public office? Baldwin wouldn’t rule out the idea completely, but also said he took the idea way too seriously to just jump into the fray.

“In New York, where I live, there are a lot of planes on the runway here at entitlement airport,” he said.