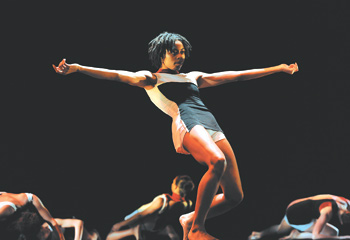 The annual Ailey/Fordham BFA Program benefit performance is an opportunity for dancers to thank supporters with a beautiful performance.
Photo by Chris Taggart

One of the hottest dance shows in New York City took place a few blocks from Broadway on March 11 as the Alvin Ailey American Dance Theater/Fordham University BFA program staged its annual benefit performance on the Lincoln Center campus.

The hour-long performance was followed by an exclusive meet-and-greet with the seniors in the program who graced the Pope Auditorium stage for the last time.

“It’s kind of bittersweet because I’ve been doing it for four years and this is it. But it’s nice to see the progression of all the different classes involved in the show,” said Preston Miller, who has trained in the choreography track of the program.

Miller, 22, hails from Chicago, but chose to apply to the Ailey/Fordham BFA program for an opportunity to work with some of the finest names in dance.

Miller and fellow students in the program wowed the audience with diverse and vibrant dance selections that made it easy to forget that the performers were college students and not seasoned professionals.

Father Grimes, speaking at a reception in the Center Gallery that preceded the performance, recounted many of the successes in the program’s nearly 12-year history.

“Through all the years, about two-thirds of the students have gotten professional contracts to dance after graduation. Last year, 81 percent of the graduating class got professional contracts,” he said. “This past summer, one of our seniors, Michael McBride, found out he was accepted into the first company of Ailey. They managed to get him back into town for the Senior Solo Performance in February. He left no doubt as to why he is in the first company.”

Dancers like McBride are why the program has gotten support from organizations such as the Jerome Robbins Foundation and the Liberace Foundation, a well as individual donors, many of whom attended the benefit performance.

Scholarships make it possible for students to get top dance training, which in this program goes hand-in-hand with academics.

“We have dancers who are really smart and who sometimes question decisions and make us a little uncomfortable, but that’s all part of the process,” said Denise Jefferson, director of The Ailey School. “They look at things not just in one narrow way. Fordham is a big part of this—the students analyze what things are about, what they are saying when they perform and how they can communicate with the audience.”

Ailey/Fordham dancers bring that attitude to audiences all over the country and world. Many of the program’s graduates get accepted into Ailey II, the second company of the Alvin Ailey American Dance Theater, which also tours extensively.

“The United States Congress has named Alvin Ailey as America’s Cultural Ambassador to the world,” said Sharon Luckman, the executive director of The Ailey School. “Between the Alvin Ailey Dance Company and Ailey II, they really travel much more than any performing arts organization. In the [Ailey/Fordham BFA] program, they are trained in the best way possible and then they are out there nourishing the whole dance world. We’re really a central part in the whole ecology of the dance world, just like Alvin Ailey wanted us to be.”

All of this is made possible thanks to the many organizations and individuals that contribute to the scholarship fund, said Ailey/ Fordham senior Preston Miller.

“A lot of us don’t come from where the greatest dancers and performers just stop by, so we’re instantly thrown into this world where you realize ‘I’m a professional,’ and ‘I’m around the greatest professionals,’ so the scholarships provide the greatest opportunities and possibilities,” he said.