skip to main content
Return to Fordham University
You are at:Home»Inside Fordham»After a Decade, Study Abroad Office Marks its Progress 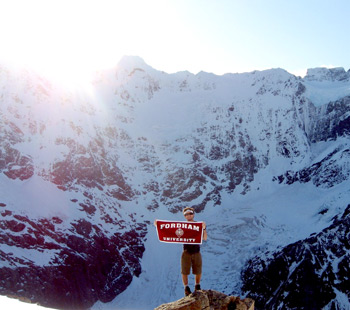 Michael Noel, a senior in the College of Business Administration, studied at the University of Canterbury in New Zealand. He snapped this photo while climbing through the Aoraki mountain range.
Photo by Michael Noel

What a difference a decade makes.

When Fordham created its Office of International and Study Aboard Programs (ISAP) at the turn of the 21st century, there were roughly 100 students studying abroad. In the 2009-2010 academic year, 765 students went abroad, including 578 undergraduates. They studied in 79 cities in 41 countries on five continents.

“We have seen enormous growth,” said Ronald Méndez-Clark, director of ISAP. “We are celebrating our 10-year anniversary with what I consider to be healthy, respectable numbers.”

The goal of ISAP is to help students gain an understanding of other cultures and to incorporate a global dimension into their chosen fields of study. Fordham prides itself in offering students one of the most extensive networks for foreign study of any major university, Méndez-Clark said.

Fordham students have always studied overseas, although most did so in a very informal manner, said Méndez-Clark, who was the director of the Latin American and Latino Studies Institute before being tapped to lead ISAP in 2000.

“Though some went officially to places like Oxford University, in essence, most of them were taking a leave of absence and then when they came back, they brought their credits and negotiated with the deans,” he said. “Another problem was quality. Some students chose their destinations intelligently while others didn’t.”

The dean of Fordham College at Rose Hill at the time, Jeffrey von Arx, S.J., realized what was happening and hired a consultant to evaluate study-abroad trends at Fordham. The result was a charge for Méndez-Clark: Organize an office that would examine programs and set protocols and policies so that study abroad at Fordham would become an academic option, not an add-on.

It took roughly three years to implement a solid internal infrastructure. Méndez-Clark reconciled practices so that students could study aboard at approved programs. Developing a roster of approved programs was perhaps the most intensive part of this process, he said, because they had to be academically sound and in line with Fordham’s mission, goal and standards.

Today, the whole attitude around studying abroad has a different feel, Méndez-Clark said.

“When I started the office, one of the most disconcerting things was how many students would come to me and say, ‘I want to go to Spain.’ I’d say, ‘I’m not a travel agent. Tell me what you want to study,’” he said. “Eventually, it was clear we needed to modify the way we were presenting program options to students. Thus, we moved from a regional/country presentation to one that underscores our study abroad options by academic setting. This has made a huge difference in how students perceive study abroad—with more rigor and seriousness of intent.”

It is not just the increase in number or attitude of students studying abroad that gives Méndez-Clark a reason to celebrate ISAP’s 10-year anniversary.

“We have developed our own Fordham faculty-led semester programs in London and Granada, as well as several short-term summer program in Moscow, Paris, London, Granada, Guangzhou, Rome and Pretoria,” he said. “These have generated great enthusiasm with faculty and students.”

Moreover, Méndez-Clark is quite pleased with students’ increase interest in an expanded world.

“Of course, students still pursue programs in the popular destinations of London, France and Spain,” he said, “but they now regularly pursue opportunities in less-traveled countries. In fact, this past academic year, there were at least two students doing full-term programs in Austria, Belgium, Chile, the Czech Republic, Denmark, the Dominican Republic, Egypt, El Salvador, Switzerland and Tunisia.”

“It has been particularly gratifying to see a steady increase in interest in parts of the world with which American undergraduates are less familiar. The growing engagement with programs in China, Japan, Africa, Latin America and the Middle East is especially exciting,” Latham said. “It demonstrates the extent to which our students are pursuing an education that is truly global in scope.”

“Studying abroad is so often a transformative experience for our students. As the Jesuit University of New York, this makes perfect sense for us, and I hope that it will be one of our primary goals as we go forward,” he added.

“The best way for a student to understand globalization and its impact is to immerse themselves in other cultures by studying abroad,” said Donna Rapaccioli, Ph.D., dean of the College of Business Administration and the Fordham business faculty.

“Fordham’s program provides countless outstanding opportunities for our students to engage in  global learning,” she said.

A goal for Méndez-Clark is to find a way for students who want the study abroad experience to get it.

“We have eligible students with great academic records who could benefit from going abroad. But for a number of reasons—primarily financial—they do not,” he said. “We have to find a way to change that.”