skip to main content
Return to Fordham University
You are at:Home»Inside Fordham»Addressing the Coptic Crisis through Education 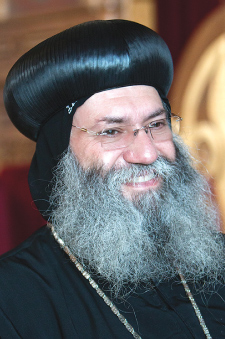 Ignorance is not bliss. Ignorance begets more ignorance, and sometimes violence. It’s a phenomenon that His Grace Bishop Anba Suriel, Ph.D., said has led to the violence plaguing Egypt of late, in particular the persecution of the nation’s Coptic Christian minority.

As the Coptic Orthodox Bishop of Melbourne, Australia, Bishop Suriel has made religious education the focus of his life’s work. He graduates today from Fordham with his doctorate of religion from the Graduate School of Religion and Religious Education.

“One of the major problems in Egypt is a lack of education,” he said. “Without people being open to understanding, we see the burning of hundreds of churches and Christians being massacred in the streets.”

Bishop Suriel said that a large influx of Coptic Christians is coming to his diocese to escape the violence in Egypt. Even though Egypt’s Muslims and Christians have lived side by side for well over a thousand years, the region’s most recent crisis has upended centuries of fitful harmony and history.

His doctoral dissertation focused on that history and on Coptic Archdeacon Habib Girgis, dean of the Coptic Theological College in Cairo, whose 60-year career as an educator brought reform and access to religious education to the Copts through the Sunday school movement in Egypt. Girgis introduced the religious reforms in the late 19th and early 20th centuries, in response to the Western missionaries who imported the Sunday school model to Egypt.

The missionaries were able to usurp Coptic religious authority via proselytizing and educating Egyptian believers, said the bishop, in part because the Coptic priests were woefully undereducated and weren’t equipped to defend their faith from Western challenges. Girgis also faced stiff opposition from priests who feared that their flocks would grow to learn more than they themselves did, and from lay people who thought he wasn’t doing enough.

Appointed as bishop in 1999, Bishop Suriel said that opening the college became a top priority for him because he envisioned the school as a hub of intellectual and communal activity. He serves as dean of the college, which operates as part of the University of Divinity—an ecumenical system that brings together 10 colleges and seminaries of Catholic, Anglican, Protestant, and Orthodox faith traditions.

It soon became apparent to Bishop Suriel that he would need to complete his doctorate if he was going to be running a college.

“With all the strains of running a diocese which is geographically very wide, the past nine years of study have been an emotional roller coaster,” he said. “It was intense and stressful, but it was very important for me to be able to promote the college and assist it to move forward.”

“I have begun to understand what happens in the Catholic field and that has added a lot of value to the work I’ll be doing in Melbourne,” he said.

Like Girgis, who eventually adapted the Western missionaries Sunday school model by giving it a Coptic flavor, Bishop Suriel said he’s open to adapting ideas from other Christian faith traditions to enrich his own.

“Fordham taught me to think outside of the life within the Coptic Church,” he said, “and to have a broader understanding of religious education.”