skip to main content
Return to Fordham University
You are at:Home»Inside Fordham»Addiction Research in the Spotlight at Brother Lawless Lecture 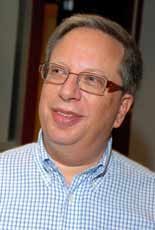 An expert on the causes and consequences of adolescent addiction discussed his latest research on Nov. 6 in a presentation at Fordham’s Lincoln Center campus.

Dr. Patrick Bordeaux (FCLC ’96), a psychiatrist from the Université Laval, Québec, Canada told the Fordham College at Lincoln Center Science Club about how his young patients are treated through motivational therapy.

Speaking to an audience that was not far removed from adolescence, Bordeaux provided vivid examples of the pain that drug use has caused his patients.

“As a patient once told me, you drink or do drugs to avoid something, to skip over things, but in reality you’re not going anywhere. You’re not in reality,” he said.

Bordeaux explained how brain function and emotion are behind drug and alcohol abuse. Addiction is born from the search for intense pleasure and the desire to escape the harsh reality of a situation, he said.

Using images from a functional MRI, Bordeaux showed how drugs and alcohol affect the mesolimbic dopamine system—the emotional part of the brain.

Those who are addicted, be it to drugs, alcohol, gambling or virtual reality video games, feel a rush in their mesolimbic systems when they see, hear or smell things that remind them of their addictive behavior.

“We can see how parts of the brain react to certain images,” Bordeaux said. “If you’re a gambling addict and your flight to Los Angeles makes a stop in Las Vegas due to inclement weather, you’re excited. You’re limbic system is lit up.

“All you’ll remember is how good you’ll feel on drugs, not that next day when you might wake up on the floor or lose your job,” he said.

The prefrontal cortex—the reasoning part of the brain—acts to send warning signals, but the addict succumbs to the needs of the mesolimbic system and keeps on chasing that feeling.

“The problem when so much dopamine is being released at once is that all the other common pleasure-generating activities of life start to feel dull and non-motivating,” Bordeaux said.

“The brain has been ‘hijacked’ by the addictive behavior that produces so much dopamine and pleasure. The brain starts to perceive these addicted behaviors as essential to survival, like eating and drinking, and will do everything to favor and privilege the addiction over everything else.”

Why is it more dangerous for adolescents to engage in risky behaviors such as drinking and drug use? Because the brain’s prefrontal cortex doesn’t finish completely developing until age 25. Those who begin to drink or try drugs after age 25 have a better chance of not developing addictive behavior, Bordeaux said.

“It’s why car rental companies refuse to rent to those under 25,” he said.

Bordeaux said the abuse of prescription drugs has been more prevalent in adolescents in recent years. He also discussed how those who abuse drugs end up with slower brain function that can be irreversible.

Bordeaux also discussed how low-pleasure receptors in the brain try to compensate by trying drugs, alcohol or other risky behaviors, Bordeaux said.

A graduate of Fordham’s post-baccalaureate pre-med program, Bordeaux returned to his alma mater as part of the Brother DeSales Lawless Distinguished Lecture Series. The series was created in 2007 in honor of Lawless, who died last year, said Joan E. Roberts, Ph.D., professor of chemistry. Brother Lawless was the first chair of the Department of Natural Sciences at Fordham.

“(Brother Lawless) got us to love what we do, and that’s why I’m here,” Bordeaux said.