Chief executives of two of the nation’s largest accounting firms traveled to Fordham University in October and November, telling students that the profession is in the midst of a “global war for talent” and highlighting the importance of integrity in a business that has been rocked by controversy in recent years. 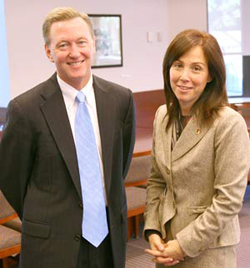 Timothy P. Flynn, chairman and chief executive of KPMG, LLP, and Barry Salzberg, managing partner of Deloitte & Touche USA, LLP, visited the Fordham Business School on Oct. 27 and Nov. 2, respectively, each addressing the state of the profession to packed audiences of students, faculty and administrators.

Perhaps no profession has faced more public scrutiny in recent years than accounting. Scandals from Enron to Tyco International shook the capital markets and led to the passage of the Sarbanes-Oxley Act, which implemented tougher reporting and disclosure standards.

Flynn told students that ethics and integrity are not negotiable, nor can they be adjusted case-by-case or client-by-client.

When Flynn was appointed in June of 2005, KPMG was dealing with problems related to the firm’s use of tax shelters for some of its clients. Flynn’s response was to put every member of the firm through ethics compliance training, implementing a “values-based compliance culture” in which everyone in the company is empowered to come forward if they detect anything that deviates from the company’s professional responsibilities.

“When you have tough decision to make, put yourself through this test: If it hits the front page of the Wall Street Journal and your mom reads it, is she going to be proud of what you did?” Flynn asked during his presentation in Flom Auditorium at the Walsh Family Library. “That is the best way I can describe my view of integrity and responsibility.” 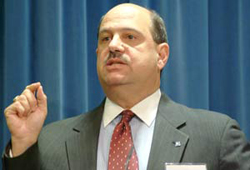 Salzberg, meanwhile, told students that in recent years he has gone out of his way to understand their generation. The reason, he said, is because Generation Y now makes up 30 percent of the population, and by 2010 will outnumber both Baby Boomers and Generation X.

Moreover, Generation Y is coming onto the scene at a time when millions of Baby Boomers will begin to leave the workforce through retirement. This large generational turnover will alter the “talent landscape,” he said, and understanding and fostering the talents and abilities of those under the age of 30 is essential for his company’s future.

Salzberg told the students that there is fierce battle for talent and it will likely stay that way for years. He noted that 70 percent of businesses say that the shortage of skilled workers presents an obstacle to their growth. He also quoted a U.S. Department of Labor study, which found that 60 percent of new jobs require skills that only 20 percent of the current workforce possesses. Salzberg said Deloitte has hired 25,000 people in the past three years, but if hiring managers could have found 30,000 qualified applicants, they would have hired them all.

“There is a serious competition for people like you with good marketable skills,” he said.