skip to main content
Return to Fordham University
You are at:Home»Inside Fordham»A Party, a Downpour and — Whew! — a Victory 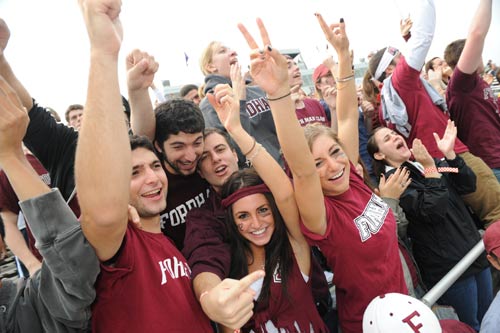 Fans who braved the rain were treated to a Fordham victory at Homecoming 2009.
Photo by Chris Taggart

The last time Gabriella Baldassarre (FCLC ’89) walked the Rose Hill campus, there was no Walsh Family Library, no multi-level parking facility and no sign of the upcoming Campbell, Salice and Conley Halls.

“It’s amazing how much has changed around here,” said Baldassarre, who joined roughly 3,000 alumni and their family members under the festival tent on Oct. 3 for Homecoming 2009.

Eating hamburgers while perusing the merchandise table, she reminisced about her Fordham experience.

“I started here at Rose Hill, but then transferred to Manhattan and earned my degree from Lincoln Center, so I guess you can say I had the best of both worlds,” she said. “Visiting the campus today and seeing how good everything looks, I keep saying to myself, ‘Why haven’t I been back here?’”

By any measure, Baldassarre picked the right weekend to come home. The tent on Edwards Parade was filled chockablock with convivial Fordham Rams, who were eager to eat, drink and cheer the football team to victory at the annual Homecoming game.

And did they ever have a lot to cheer about.

Pitted against the 3-1 Monarchs from Old Dominion University, the Rams scored a come-from-behind touchdown in the final two minutes. The crowd, most of whom braved the occasional downpour, saw the Rams win their first contest of the season, 34-29.

“This was worth it,” said William P. Lafferty (FCRH ’88), who endured the rain with his daughter, Alyssa, both of whom were drenched by the end of the game. “Seeing Fordham win on Homecoming—it was completely worth it. I feel light as a feather.”

The rain may have come down in buckets, but that didn’t stop the Department of Athletics from thanking its most generous benefactors. Fordham recognized 12 Hall of Fame members of its Maroon Club—people who have given $25,000 or more to the athletics program—with specially designed Fordham varsity jackets.

Also honored at halftime was the family of Frank “The Bull” McCaffrey, a former football star who was named Fordham’s first All-America a century ago. On hand to accept the accolade were McCaffrey’s two surviving children: Thomas McCaffrey (FCRH ’52) and Florence McCaffrey Mishaw, as well as several other family members.