skip to main content
Return to Fordham University
You are at:Home»Inside Fordham»A Jesuit Scholar Looks Between the Lines 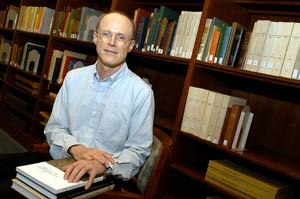 Martin Chase, S.J., is an expert in skaldic poetry.
Photo by Ken Levinson

The first thing one notices inside the Dealy Hall office of Martin Chase, S.J., Ph.D., are tiny squares of refracted light dancing on the walls, spectral reflections filtered through a small, pear-shaped prism hanging from a string in his window.

“It was a gift from my mother,” Father Chase says, “on the day that I took my vows.”

The symbolism attached to his mother’s gift, which is reflective and also multifaceted, turned out to be a good match. Father Chase, an assistant professor of English, loves the English language, whether it is “Old, Middle or Modern,” and teaching it is his primary passion. But, come summer, Father Chase will head to Iceland and Denmark as part of grant-funded research project to pursue another passion: the scholarly study of skaldic poetry.

Skaldic poetry is Old Norse and Scandinavian verse written by the skalds, or court poets, from the days of the Vikings through the 14th century. The skalds were employed by courts and kings to memorialize their achievements through oral and, later, written rhyme. Only a modest amount of the poetry exists, and Father Chase is one of a few dozen scholars working on compiling a new edition and translation of all the surviving skaldic poetry, which will be published both online and as a nine-volume collection.

“Everyone asks me if I have a Scandinavian connection,” says Father Chase, who has taught English language and medieval studies courses at Fordham since 1999. “I don’t. I’m just very interested in the evolution of languages. The further back you go in history, the closer the languages are, so Old Norse is surprisingly quite similar to Old English; they’re both Germanic in origin.”

Father Chase’s fascination with studying the poetry of the skalds lies in its complexity. Because it started out as an oral tradition, skaldic poetry has a fixed count of six syllables per line and eight lines per stanza. Like Latin and German, it applies declensions, so that the subject-verb-object order in today’s English is not necessary to construct a sentence. The poetry also employs a system of alliteration that links every two lines, and, unlike most conventional poetry, it positions rhymes in the middle, not the end, of lines.

And then there are the kennings, or metaphors, which employ a great deal of obscure wordplay and require much reflection. The sea might be “the whale’s road” or “the path of a ship,” making it, Father Chase says, “notoriously difficult to interpret—and correspondingly rewarding to ponder.”

“These images can get really complicated and involved, so that sometimes even scholars debate about what is actually being talked about in the poem,” he says. “To me, each stanza is like a Chinese box that contains another, that contains another. The deeper that one delves into the stanza, the more it expands in meaning and significance.”

For the last three summers, Father Chase has been editing one of the most famous post-Christian skaldic verses (referred to as the “Norse Divine Comedy”), a 14th-century poem called Lilja. He transcribed nine of the 20 existing manuscripts. The book will be published in the winter by the Belgium-based Brepols Press. This summer, his work in Reykjavik and in Copenhagen will focus on how post-Christian, Latin poetry from England influenced the later skaldic works.

“After the conversion to Christianity in Iceland, the poetry becomes quite different; poets started breaking their older traditions,” Father Chase says. “The problem with much of the scholarly interpretation is that once people figured out how the [poetry]schemes worked, they got this idea that it had to be exactly one way, and if it was not, well, they’d alter it so that it would rhyme better.”

Although technology has made many of the manuscripts available online—a development that pleases Father Chase and many other scholars—there are times, he says, when studying the physical manuscript is necessary.

“The more I look at the original manuscripts, the more I see that the really good poets were adjusting and bending the rules, like Shakespeare would bend the meter and break the rules all over the place, which was his poetic genius,” Father Chase says. “In later [skaldic]poetry, you see a lot of influence from Latin poetry, especially from psalms and hymns and the special rhythms they used.”

He hopes that his rhythmic scavenger hunt through the manuscripts will yield a better understanding of how meter evolved in the post-conversion poetry, and, possibly, uncover any modern biases in the translations.

The intellectual challenge of working with such an esoteric form of poetry is rewarding, he says, but the poetry also sheds light on more universal questions. To Father Chase, who is working with a faculty committee revising the University’s core curriculum, all poetry reveals a part of what it means to be human.

“Obviously students need to know concrete things, like math and the sciences,” he says. “But I think that humanities in general are really important to study because they make us humane, and any kind of poetry, even skaldic poetry, deals with transcendence. It doesn’t have to be Shakespeare.”

Father Chase, who converted to Catholicism and who last fall celebrated his 25th anniversary in the Society of Jesus, is convinced that there is a spiritual dimension to the study of poetry.

“I am interested, as a priest, that people realize there is more than meets the eye, more than what’s material—that they have an inner life and so does everyone else,” he says. “If one can respect that, one can grow.”