skip to main content
Return to Fordham University
You are at:Home»Inside Fordham»A Jesuit Gives Voice to Peace Activists in the Holy Land 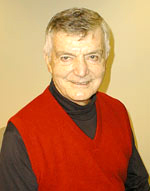 Donald Moore, S.J., compares Middle East peace activists to pre-Christian prophets who spoke out on behalf of others.
Photo by Victor M. Inzunza

In late 1998, Donald Moore, S.J., who had lived and taught for most of his life in New York, learned of the shortage of Jesuits in Jerusalem’s Pontifical Biblical Institute and offered his services to Father General Peter-Hans Kolvenbach. Although Father Moore speaks neither Hebrew nor Arabic, Father Kolvenbach accepted his offer. Since January, 2000, he has spent most of each year in the Israeli capital while continuing as an adjunct emeritus faculty member of the Theology Department at Fordham, where he’s taught since 1963.

The transition to Jerusalem was in some ways natural for a Jesuit who had spent much of his life studying and teaching the works of Jewish theologian Martin Buber and engaging in the Jewish-Christian dialogue. (Buber, although a Zionist, believed that Jews and Arabs must develop the land together without one imposing his will on the other.) What Father Moore also finds in Buber’s body of work is a deep spirituality that in so many ways is compatible with, and deepens, his own Jesuit spirituality.

“There is a loss of spiritual and ethical dimension in human living,” wrote Father Moore in his introduction to Martin Buber: Prophet of Religious Secularism (Fordham University Press, 1996), and in the ensuing years that loss has become even greater. “The market tends to run the whole of our lives,” he said. “The spiritual dimension is becoming more and more eclipsed.” (One of Buber’s later works isEclipse of God: Studies in the Relation Between Religion and Philosophy.)

Father Moore has also written extensively on the thought of Abraham Joshua Heschel. Both Buber and Heschel espouse a Judaism that affirms all that is genuinely human. Judaism’s task is indeed to teach the world how to be human, for the human is the holy, it is the image of God.

Living in Jerusalem, Father Moore has experienced the violence of the Israeli Occupation and the horror of Palestinian suicide bombers. Nevertheless, he still sees many beacons of hope in the Middle East. There are numerous activist groups, both Palestinian and Israeli, who continue to struggle for justice and peace. He compares the current peace and justice groups in the Holy Land to the great biblical prophets of Israel “who expressed the pathos of God in response to the treatment of the widow, the orphan or the stranger.”

Father Moore sees as one of his tasks that of spreading the word, via the Internet and print media, about these courageous activists. He has written articles on Israeli, Palestinian and American peace activists for America, Promotio Justitiae, published by the Society of Jesus in Rome and Jivan, published by the Jesuits of India. Most recently, he has lectured on Palestinian and Israeli peacemaking efforts at various places in the metropolitan area, including Rose Hill and St. Peter’s College. He praised groups like the Israeli Committee Against House Demolitions (ICAHD), who protest the bulldozing of Palestinian homes, Machsom Watch, a group of Israeli women who monitor checkpoints and report abuses, and the Bereaved Families Forum, Israeli and Palestinian families who have lost loved ones, yet who work together to break the cycle of violence. “For some Palestinians, these actions are a revelation, for they only know the Israelis who come with tanks and guns,” said Father Moore.

“I find my hope in those individuals and groups, both Jewish and Palestinian, who speak out again and again, at great personal cost, for peace and reconciliation despite the seeming hopelessness of the political situation.” Peace activists in Israel and Gaza are often branded as collaborators or traitors, yet they continue to press on. Their influence, Father Moore admits, is minimal. “I simply want to support the people who are speaking out and to let them know someone cares and will give them a voice.”