The Lincoln Center, Rose Hill and Westchester campuses and the Calder Center field station are mostly quiet during the summer, at least when it comes to people. 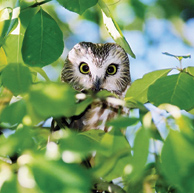 But for things that slither, soar, scamper and swim, it’s a different story.

Coyotes roam the 113-acre Louis Calder Center Biological Field Station in Armonk, N.Y. Red-tailed hawks are raising eyasses on a building ledge at Rose Hill. Wild turkeys wander the grounds at Westchester. And visitors to Lincoln Center are not immune from encounters with pigeons.

Though Fordham’s four campuses are geographically and ecologically distinct, they all feature animals with unique capacities for adaptation, said Thomas Daniels, Ph.D., associate research scientist at the Calder Center.

“They’regenerally going to be omnivorous, and can take advantage of a lot of different food sources,” Daniels said, “while animals that require a certain patch of woods or a certain body of water would be relegated to areas that are less developed.”

One of the strengths of the Calder Center is its size, its 10-acre lake and the fact that it is contiguous to other heavily forested sites, he noted. These features allow animals to travel freely between Calder and surrounding areas.

“It’s almost like a positive feedback loop. If you’ve got animals in one particular place, that opens up a habitat for more animals to arrive to feed on them,” he said.