Fordham athletes gathered on May 6 to celebrate another year of excellence in sports and to bid a fond farewell to a Jesuit who means a great deal to the department. 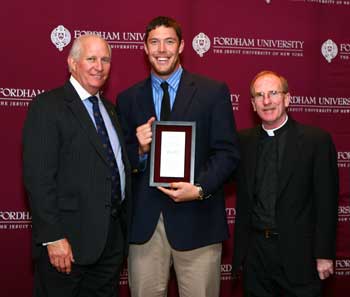 John Skelton (center) was selected in the fifth round of the NFL Draft by the Arizona Cardinals.
Photo courtesy of Fordham Athletics

Joseph Currie, S.J., the longtime athletics chaplain, was honored at the start of the 76th Annual Block F Dinner with a varsity jacket and rocking chair. Father Currie, who is also the associate vice president for University mission and ministry and director of campus ministry, is leaving Fordham after 13 years.

Later that evening, the University presented its Iron Major Coach of the Year award to Steve Potsklan, head coach of the men’s and women’s swimming and diving teams.

Potsklan received the prize last year and also in 2001. This award was especially noteworthy, however, due to his coaching the women’s squad to Fordham’s first Atlantic 10 conference title in any sport.

Always ready to highlight the accomplishments of his swimmers, Potsklan credited his success to the teams’ most experienced members.

“Our seniors are great leaders,” he said. “That’s what has really helped us these past few years.”

The Vincent T. Lombardi Award, which is given annually to the top male athlete, went to senior football quarterback John Skelton.

Skelton recently was drafted in the fifth round by the NFL’s Arizona Cardinals and was named the team’s most valuable player. A four-year starter, he wrapped up a record-shattering career for the Rams last fall.

“Fordham has had eight cardinals in its history,” said Joseph M. McShane, S.J., president of Fordham. He was referring to seven cardinals of the Catholic Church plus Frankie Frisch, an alumnus and baseball hall of famer who spent his career with the St. Louis Cardinals.

“You are our ninth cardinal,” Father McShane said to Skelton, referencing the NFL team who drafted him.

For his part, Skelton thanked his teammates and the University’s athletics staff. “I look forward to continuing to represent Fordham as best I can,” he told the crowd.

Napoli won the 500 freestyle at the 2010 Atlantic 10 Championships, earning First Team All-Conference honors, while Mineau has been one of the top collegiate softball pitchers in the nation this season.

“I’d like to thank my entire team, because I’d be nothing without them,” Mineau said. “I hope we keep on rolling.”

Executive Director of Athletics Frank McLaughlin congratulated the sportsmen and sportswomen on another successful year and announced that the athletics department included 275 students with a 3.0 GPA or better—fully 51 percent of all student-athletes at Fordham.

In his remarks, Father McShane thanked the players for being stellar ambassadors for the University.

“I came here this evening to thank all of you for representing Fordham with class,” he said. “I praise you for the greatness that you bring to the University every day. You inspire us by what you do and by your generosity to one another.

“Please, be your own best selves for the rest of your lives.”