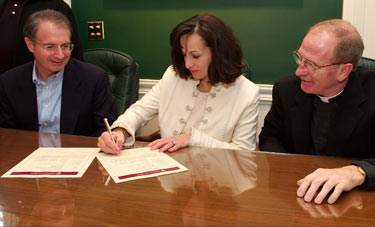 Thomas P. Salice, CBA ’82, and Susan Conley Salice, FCRH ’82, were honored on Dec. 6 at a signing ceremony at the office of Joseph M. McShane, S.J., president of Fordham. The couple had pledged to give $7 million for Salice and Conley Halls, two conjoined dormitories rising in the southwest corner of the Rose Hill campus.

After the signing, which was attended by the couple’s daughters, parents and other family members, Father McShane took the group to the site, which is ringed with a fence that reflected renderings of the buildings. An afternoon lunch at Enzo’s Restaurant in nearby Belmont followed, bringing back “wonderful memories.”

Salice and Conley, who met on the “A” train while chaperoning a group of Bronx schoolchildren to a playground while attending Fordham, have long pursued a path of service to others. Salice, a member of Fordham’s Board of Trustees, was the first member of his family to attend college; Conley was one of the first in her family.

The new residence halls, two towers joined at the base, will provide housing for 460 students. Together, they will encompass 76,000 square feet and are expected to open their doors in June 2010.

Thomas Salice is a co-founder and managing member of SFW Capital Partners, a private equity firm, and the chairman of its investment committee. His firm’s investment activities are focused in the analytical tools and outsourced analytical services sectors. He largely attributes his interest in finance, and entrée into that world, to Fordham.