skip to main content
Return to Fordham University
You are at:Home»Commencement»Commencement 2017»Going for the Gap Year

Fordham College at Lincoln Center 2017 graduate Miriam Ambrosino is med-school-bound, but she is looking first to put some real-world experience under her belt.

After graduation, Ambrosino, a philosophy major and bioethics minor, is taking almost two years off before beginning medical school in the fall of 2019. She’ll spend part of that time interning at Cook for Your LIFE, a nonprofit that offers cooking classes and nutrition information for cancer patients and survivors.

Jeremie Langlois, FCRH ’16, has been interning in Jordan since he graduated, and is looking forward to returning to school. He and Ambrosino are among a wave of college seniors who have decided to take a gap year before continuing their graduate studies.

Ambrosino said taking time off to work in the field, with people living with life-threatening illnesses, will complement her education in a way going directly to medical school could not.

A Calling to Do More

“I think it will make me a better medical student to have that perspective. I just felt called to do more before entering,” she said. Ambrosino, whose father and aunt died of cancer, has studied at the Natural Gourmet Institute and has volunteered with Cook for Your LIFE previously, doing everything from preparing meals to ordering aprons to cleaning up food scraps.

She’s not the chef, but she’s learning cooking and knife skills and how much more there is to treating patients than just examining them and prescribing medication. “I’m learning from doctors, chefs, and nutritionists about chronic symptoms, disease management, cooking meals that are appropriate for different illness,” she said of the experience, which will include doing research at Columbia University’s Mailman School of Public Health on dietary and lifestyle interventions for breast cancer survivors.

“It’s not about curing people, but making sure that people are comfortable.” She ultimately wants to study psychiatry and plans to enter a master’s program in bioethics for a semester as well. “I really want to focus on medical ethics and nutrition together,” she said, combining her love of cooking with her desire to do something about cancer, which has touched her life in such formative ways. 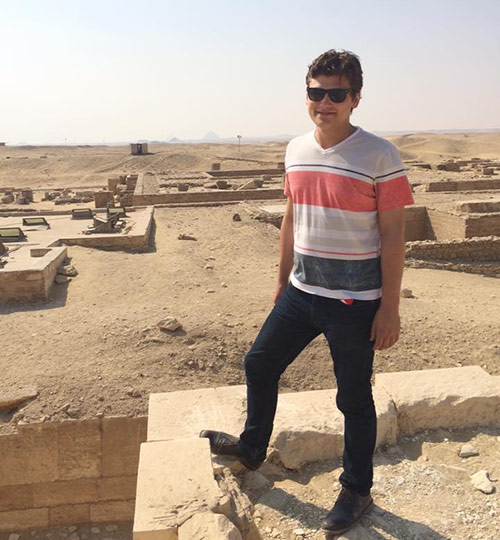 Jeremie Langlois, FCRH ’16, attended high school in Cairo, and was in Egypt during the 2011 Arab Spring uprising. He said it “sparked my passion for the region.”

Since he graduated, Langlois, who grew up in a bilingual household (English and French), has spent his time interning at the Amman Center for Human Rights Studies, while also taking classes in modern standard Arabic at the Qasid Arabic Institute. He has been accepted to the University of Texas at Austin to do a double degree in law and graduate-level Middle Eastern studies, but is putting it off for a second gap year to work and prepare for the LSAT. “As someone with a broad range of interests in both the Middle East and domestic politics, the dual degree will allow me to keep my options open for future career paths,” he said. But he’s also staying open to change that may come from the remaining gap year, he said. “This process is still very much in progress.”

Students like Ambrosino and Langlois take gap years for a variety of reasons, said Jorimel Zaldivar, a counselor in the Office of Career Services.

“Usually the intention is to step outside and perhaps take a breather from the commitment to extend their education,” he said. “It may also be a time for seniors to regroup a bit, reaffirm some goals they have placed for themselves, and use this time to outline an action plan in meeting these goals.”