skip to main content
Return to Fordham University
You are at:Home»Inside Fordham» 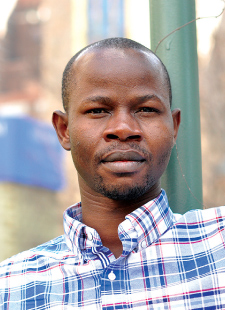 Wilson Owuor has earned his degree while teaching in high-needs schools in the Bronx.
Photo by Janet Sassi

Wilson Owuor never intended to become a teacher at first.

As an undergraduate physics major, he aspired to pursue a doctoral degree in physics. After graduating, however, Owuor undertook a year of teaching at a high school simply because he needed a job. The experience surprised him.

“I enjoyed the interaction and relationships with the students,” said Owuor, who is graduating with an M.S.T. in adolescence math education from Fordham’s Graduate School of Education (GSE). “There were of course some challenging moments, but each day was a new experience.”

He spent the year teaching algebra and geometry at a Bronx high school. There, he learned that students who struggled were often not deficient in academic ability; instead, they lacked motivation and external encouragement.

“I remember one student who, on my first day, came in as if she was ready to fight,” he said. “I was shocked at first because I didn’t expect such opposition.”

Over time, Owuor discovered that the student’s opposition was nothing more than a self-defense mechanism that had grown out of years of discouragement and frustration.

“I realized that most students were looking for someone to affirm a perception they’d already adopted—that they hate math, or that they aren’t good students,” Owuor said. “So I made it clear to her that I was not going to accept such a negative perception, and that I expected her to do much better because I knew she could.”

When that first year of teaching came to a close, Owuor began looking for opportunities to continue in the education field, and eventually came across GSE’s Teacher Residency Scholars Program (TRIP). The 15-month program combines academic coursework with a year of student teaching at high-needs New York City public schools.

Being a TRIP scholar has been pivotal, Owuor said, because it has allowed him to spend most of his graduate education gaining hands-on experience. In doing so, he has learned that one thing critical to being a successful teacher is knowing students well and building trust with them. The students he encounters, he said, are accustomed to having teachers who do not understand them and do not have the capacity to empathize with their situations. By nurturing relationships of trust he has helped students tap into abilities they had never cultivated.

“If you go in [to teach]as an idealist, you’re going to become frustrated. You need patience and an understanding of what you’re facing.”

He advises that teachers remain perseverant—the same quality he strives to instill in his students.