Over the last year, Fordham School of Professional and Continuing Studies (PCS) focused on promoting its new identity, on increasing the range and diversity of its academic offerings, and on restructuring for greater efficiencies. 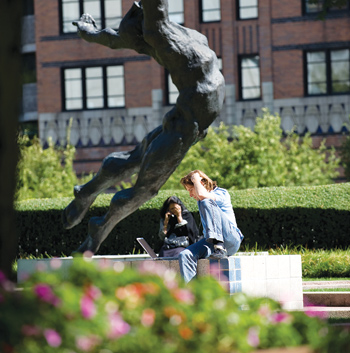 In regard to its new identity, PCS evolved a multilevel communication campaign focused on its name change. The outreach was external, with a marketing campaign in print, radio, Web, and direct mail, as well as internal outreach to all alumni, students, prospects, and faculty. At the same time the campaign presented a new look for PCS as a whole, which allowed it to reposition itself within the greater New York area. The new identity and the new look point to the expanded role of the school as it moves into new academic areas (business, post-baccalaureate premed), develops a greater diversity of courses for non-credit and certifications, and collaborates closely with the Summer Session and the other professional and graduate programs.

To strengthen its identity, PCS also developed two independent, standing committees which it previously lacked: a faculty council and a board of advisors. The faculty council has by-laws approved by the University’s Board of Trustees, and will have representation from all the different schools. The members will advise the dean on curricular matters, assure the academic integrity and quality of the programs, and strengthen the relations between PCS and the other schools. Similarly, the new board of advisors provides the school with a group of committed leaders in various professional venues. They have already begun meeting this past spring to put forward ideas for professionally based programs, for corporate contacts, and for student internships and job counseling. Finally, PCS also successfully put through a slightly revised core curriculum for its students that reflects their differing needs and requirements.

This past academic year, PCS piloted a post-baccalaureate premed program, with approximately 30 students. Its initial success has led to an official marketing campaign and planned launch for fall 2012 at all three campuses. Similarly, a new media program (professional studies in new media, or PSNM) was registered by the New York State Education Department (NYSED) late last summer. This spring saw a successful public round table to announce the program, with guest speakers from local Westchester and New York City media companies.

Over the long term, PCS has many other projects in preparation. Most are collaborative in nature, drawing on resources across the University. Working with Westchester Community College, PCS is considering launching a Registered Nurse to BSN completion degree, part of which could be online. In general, PCS is continuing with its development of online and hybrid classes to supplement the on-site courses.

As a school for transfer adult students, PCS has very few students who participate in study abroad and very few international students. However, the school is developing closer ties with surrounding institutions, such as the Albert Einstein College of Medicine and New York Medical College in relation to its premed programs and is looking to expand the number of its articulation agreements beyond LaGuardia Community College and Westchester Community College.

PCS By The Numbers

Prestigious fellowships and awards: 4
compared to 1 and 1 in the two previous years, respectively