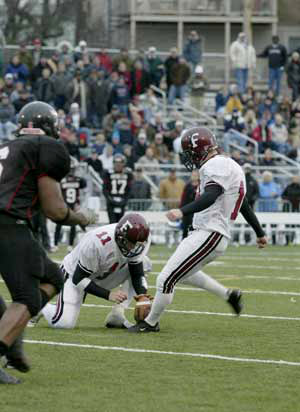 Matt Fordyce (FCRH ’03) became the first kicker in Patriot League history to be named First Team All-Conference as a punter and a placekicker.
Photo courtesy of Fordham Athletics

Eight new members will be inducted into the Fordham University Athletic Hall of Fame on Sunday, Jan. 25, joining such Fordham notables as Frankie Frisch, Vince Lombardi, Vin Scully and Peter Harnisch.
The day will start at 9:30 a.m. with a special Mass in the University Church, followed at 11 a.m. by the annual awards brunch in the McGinley Center Ballroom. At 1 p.m., the men’s basketball squad will take on Duquesne University in the Rose Hill Gym. The new Hall of Famers will be introduced to the crowd at halftime.

Joe Bernal (Swimming Coach): In a short time, Bernal accomplished a lot with the Fordham swimming and diving program. He led the 1973-1974 team to the NCAA Championships, a squad that finished second at the Metropolitan Championships and seventh at the Eastern Championships.

Matt Fordyce FCRH ’03 (Football): In 2002, Fordyce became the first kicker in Patriot League history to be named First Team All-Conference as both a punter and a placekicker, doing so in his senior season. That year, he connected on an NCAA I-AA playoff record five field goals in the 2002 NCAA I-AA playoff win at Northeastern.

Andrew Nacrelli CBA ’55 (Football): Nacrelli was a Second Team All-East selection as a senior in 1954 and was invited to play in the 1954 Senior Bowl in Mobile, Ala. as a punter. A two-way starter as a junior and senior, Nacrelli led the team in receptions as a junior and was drafted by the Philadelphia Eagles following graduation.

Joseph Pantginis FCRH ’91 (Track and Field): Pantginis set the school high jump record as a senior in 1991 while scoring in the event at the IC4A Indoor Championship. He also won the 1991 CTC and Metropolitan Conference high jump championship.

Amanda Vogel FCRH ’99 (Rowing): After learning to row with the novice team as a freshman, Vogel proved to be a quick learner, competing with the Atlantic 10 and Dad Vail championship crews as a sophomore. She went on to race at Women’s Henley in England as a sophomore and made the final four of thirty international college crews in the collegiate four event.