skip to main content
Return to Fordham University
You are at:Home»In the News»Cuomo Signs Climate Change Act into Law at Fordham
Photos by Bruce Gilbert
New York Governor Andrew M. Cuomo, FCRH ’79, came to Fordham Law on July 18 to sign the Climate Leadership and Community Protection Act into law. With former U.S. Vice President Al Gore standing beside him, Cuomo signed into law a bill that will dramatically increase the state’s efforts to mitigate and reverse the effects of global climate change.

“In a few minutes, I will sign the most aggressive climate law in the United States of America,” Governor Cuomo said to raucous cheers and applause from an audience filled with assembly members and activists.

The law requires statewide greenhouse gas emissions to be reduced by 85% below 1990 levels by 2050 and offset the remaining 15% with measures such as planting forests and capturing carbon for storage underground. 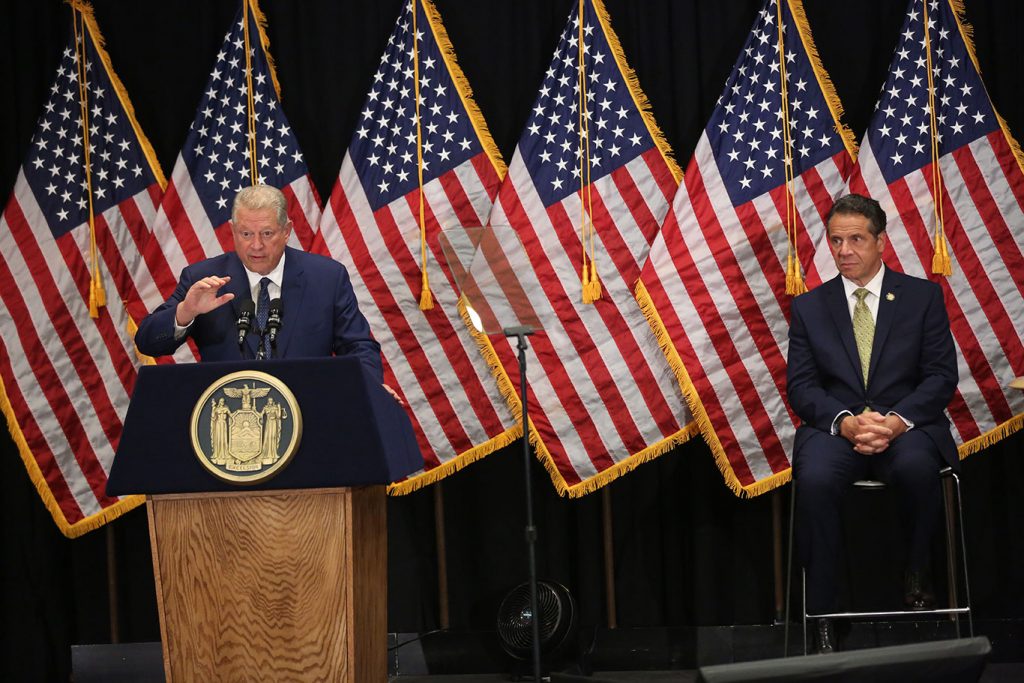 Regulations will also ensure that a minimum of 35% of investments from newly created energy efficiency funds will be reinvested in disadvantaged communities. Representatives from environmental justice communities and state government will help identify communities for investment. Vice President Gore noted that many suffering the effects of pollutants that accelerate climate change are disproportionately found in communities of color. He said he found it startling that the number of African-American children who die from asthma is 10 times greater than the number of white children.

“This is unacceptable and that is only one of the statistics that illustrate why we have got to do better on environmental and climate justice,” he said.

The bill also establishes a council to outline recommendations for reducing statewide greenhouse gas emissions, with the goal being net-zero emissions in all sectors of the economy. All state agencies would consider the impact of attaining the statewide greenhouse gas emission limits when issuing permits, licenses, or other administrative approvals.

“We are almost literally watching the world melting right now, and the federal government has chosen to turn a blind eye to this to retreat from action,” said Basil Seggos, the commissioner of the state Department of Environmental Conservation, in his introduction of the governor. “It’s really falling to the states to lead.” 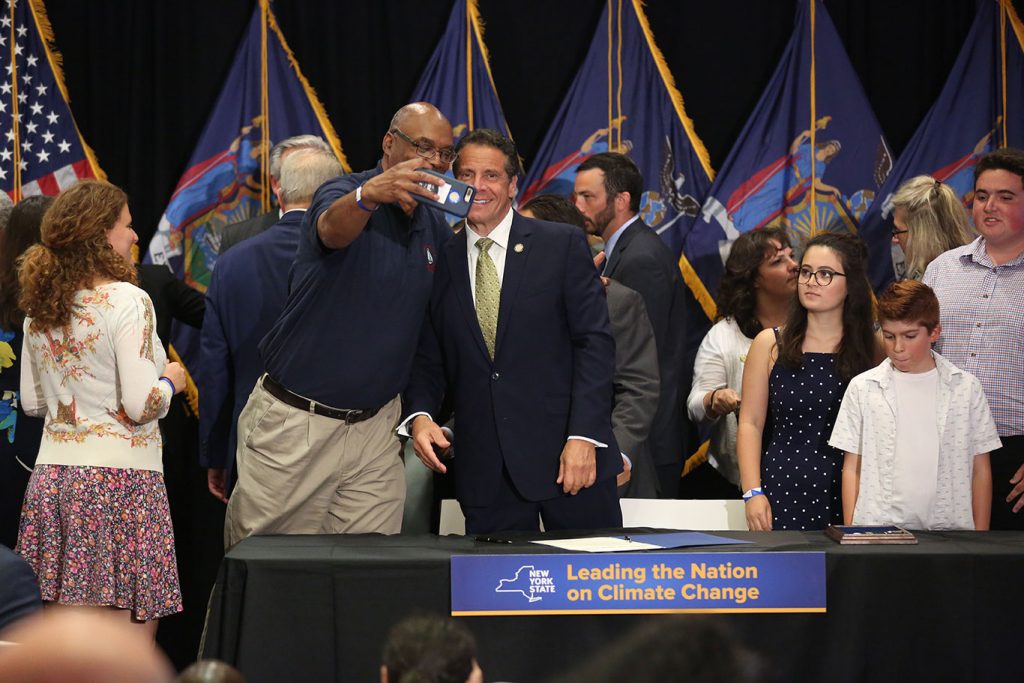 The governor called the law “the most consequential” of his administration that would “determine the future, or lack thereof.” He left little room for naysayers of climate change.

“A complicating factor is that these pressing issues must be addressed at a time in which emotion and partisanship rule this nation over logic and fact,” said the governor. “But even in this chaos of political pandering and hyperbole, there is still facts, data, and evidence. And climate change is an undeniable scientific fact, period. To deny climate change is to deny reality. All credible scientists agree.”

He then delved further into details about the project, including two offshore wind power fields, a wind power training program run by the State University of New York, and several port upgrades that will be necessary to accommodate the massive infrastructure required for wind power. The new green jobs will be substantial, and they’ll be union, he said. Those projects are expected to be completed by 2024.

Vice President Gore concurred that that sustainability revolution means more jobs for Americans. He cited a recent paper from the Bureau of Labor Statistics that reported solar jobs are the fastest-growing jobs in the United States, growing six times faster than the average job.

He said that thanks to efforts like New York’s, the green movement is gaining momentum, though perhaps not fast enough.

“We’re gaining momentum, but the truth is some damage has already been done, and more will be, but we still have a chance,” he said, his voice rising.

“We still have it within our power to grab hold of this crisis and save the future.”

The bill signing was sponsored by the Office of Government Relations and Urban Affairs.

“I thought the event was an excellent opportunity to be part of a historical event with a governor who is also a Fordham alumnus,” said Lesley Massiah-Arthur, associate vice president for government relations and urban affairs. “The fact that Fordham was chosen for this event aligns with what the University offers academically and socially, whether it’s our own environmental policies, our environmental law offerings, or the research at the Louis Calder Center.”

“Fordham University was honored to host Governor Cuomo and Vice President Gore for this momentous bill signing. Given Fordham’s longstanding commitment to promote environmental sustainability and pursue research that addresses climate change, we were thrilled to celebrate New York’s commitment to reduce greenhouse gas emissions and transition the state toward a green economy.”