skip to main content
Return to Fordham University
You are at:Home»In the News»Christmas, Chanukah, and New Year’s Eve: All in Sync

By Bruce Cooper, Ph.D.
For the first time that I can remember, both Christmas and Chanukah begin on the 24th of December this year, with the first of eight Chanukah candles being lit, yes, on Christmas Eve. 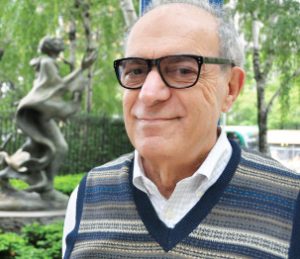 And eight days later, all eight Chanukah candles are lit together on New Year’s Eve, with the holiday ending at sunset on New Year’s Day, Jan. 1, 2017. And New Years is a major secular holiday celebrated by Jews, Christians, and other groups.

Thus, Jews and Christians can and are celebrating their holidays in sync with each other this year; so children and adults should understand and relate the meanings of the three holidays of Chanukah, Christmas, and New Years 2017.

Jews celebrate Chanukah for eight days for historical and religious reasons. In 586 BCE [Before the Common Era], the Babylonians destroyed the Holy Temple in Jerusalem and exiled the Hebrews.

And the miracle of the holiday was and is, as the story goes in the Books of Maccabees, that the one bottle of oil lasted, yes, for eight days–a true, glowing, exciting eight-day miracle.

So Jews the world over light candles on their Menorah’s (candlesticks) for eight consecutive days–adding one new candle each day–plus repeated use of a ninth shamas (“helper”) candle, used for lighting the other candles, one through eight.

Thus, Jews light one new candle for each day of Chanukah, until all 8 and the shamas (ninth candle) are burning on the final day of the holiday.  And children–and adults–often eat food cooked with oil to remember the “miracle of the oil”–such as donuts, or fried potato cakes called latkes–sing Chanukah songs, and often exchange gifts, yes, for eight days.

So, this year, Chanukah will begin on Christmas Eve and end on New Year’s Day, as the 2017 New Year begins. What a perfect time to share and learn about different religious beliefs and practices.

The celebratory overlap of Chanukah and Christmas has only occurred four times in the last 100 years, with few if any times where the two holidays and New Year’s Day overlap so totally. Wow, miracles occur all around us, and have great holidays, all!
__________

Bruce S. Cooper, Ph.D., is Professor Emeritus at Fordham University, NYC, and an active scholar in the study of education policy, politics and finance of public, private and religious schools.